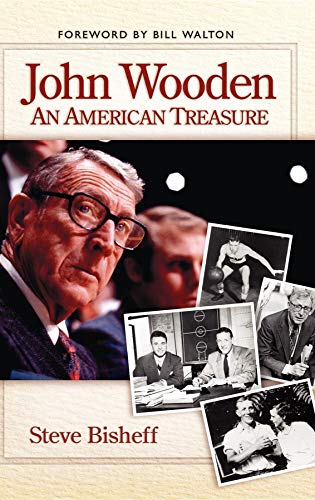 About John Wooden: An American Treasure

Product Description Even today, 29 years after retiring from coaching basketball at UCLA, John Wooden remains America's Coach. John Wooden: An American Treasure is the definitive book on his extraordinary life, from his early years as a small-town legend from Martinsville, Indiana, and an All-American guard at Purdue to his legendary years at UCLA and the fruitful years following his retirement. Here is the story of his relationship with his late wife, Nell: their love affair for the ages, his deep depression after her death in 1985, and how his faith and his children, grandchildren, and great-grandchildren provided him with the reason to embrace life again. The events that led to his decision to walk away from coaching at the pinnacle of success in 1975 are explained in detail, as well as the carefully planned words he used to tell his shocked players in the locker room that he would be retiring after the NCAA Finals game in San Diego. Here are the behind-the-scenes stories of how Wooden was offered the chance to manage the Pittsburgh Pirates, how he developed his famous Pyramid of Success, and the real secret behind why his UCLA teams were able to win more consistently than any other collegiate team ever. Here are up-close, personal moments that reveal what his life is now. On the year of the 40th anniversary of his first national championship at UCLA, and more than 30 years after his autobiography, John Wooden: An American Treasure reveals why this kind, endearing, unbelievably intelligent coaching legend, even at age 94, remains one of the more fascinating, extraordinary, yet humble men of this, or any, generation. Ultimately he has become America's Teacher as much as its most celebrated coach. Review Bisheff explores the secret passages of Woodens Pyramid of Success, and he finds treasures we never knew existed. -- Nick Canepa, San Diego Union-Tribune Bisheff's book is like getting a rare inside look at the greatest dynasty in the history of college sports. -- Dick Weiss, New York Daily News About the Author STEVE BISHEFF has covered John Wooden longer and more extensively than any other journalist, beginning as a young UCLA beat writer in the early championship years through Woodens final season and the years since he retired. Bisheff has been a sports columnist for the Orange County Register since 1982, covering everything from the Super Bowl to the Olympics, as well as the Angels, Lakers, Dodgers, USC, UCLA, and major horse races.

Last Christmas: Memories Of Christmases Past And H...

Murder On Shades Mountain: The Legal Lynching Of W...

The Last Good Year: Seven Games That Ended An Era

Before
₱ 1,658.00
Pre-order Item
I confirm to purchase this pre-order item.
Big Discount!
This product, John Wooden: An American Treasure, is currently discounted at 54% off! We don't know when it will go back to its original price so order now to secure it at this price! We'll make sure to order it immediately!
Other Choices
Return Policy
For more details please visit our page about Cancellations, Returns, and Refunds