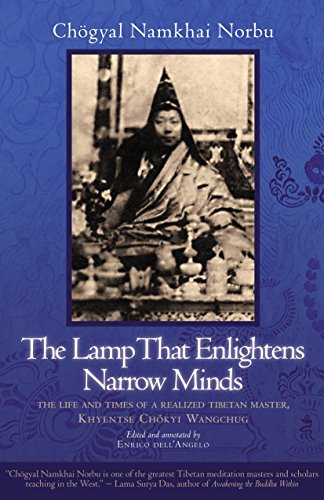 The Lamp That Enlightens Narrow Minds: The Life and Times of a Realized Tibetan Master, Khyentse Chokyi Wangchug

About The Lamp That Enlightens Narrow Minds: The Life And

Product Description The Lamp That Enlightens Narrow Minds: The Life and Times of a Realized Tibetan Master, Khyentse Chökyi Wangchug presents an engaging account of the life of Khyentse Chökyi Wangchug, a realized Tibetan tulku (reincarnated lama or teacher). The book's historical references provide a detailed portrait of Tibet on the verge of invasion and occupation by Chinese forces in the decades leading up to 1959 when Chinese repression led the Dalai Lama to take refuge in India. Narrated by Chökyi Wangchug's nephew, author and international Tibetan teacher Chögyal Namkhai Norbu, this inspired biography describes the extraordinary events of Chökyi Wangchug's life during this momentous period in Tibetan history. Born in 1909 in a valley south of Derge, an ancient center of Tibetan culture, Chökyi Wangchug was recognized at an early age as a reincarnation of a tulku and thus received Buddhist teachings from the greatest masters of the epoch . A privileged observer of his uncle's life, Namkhai Norbu reveals the complexity of Tibetan Buddhist hierarchy and the conflicts caused not only by Chinese forces, but also by people close to Chökyi Wangchug who had become members of factions motivated by bigotry and personal greed. Despite the difficulties he encountered, he maintained a state of equanimity and dedicated himself to a life of peace and compassion for all sentient beings. Ultimately tortured and imprisoned by the Chinese, he and two other realized Tibetan teachers passed away at the same moment while meditating. Review "Chögyal Namkhai Norbu is one of the greatest Tibetan meditation masters and scholars teaching in the West." — Lama Surya Das, author of Awakening the Buddha Within and Awakening the Buddhist Heart, and the founder of the Dzogchen Foundation in Massachusetts "This book is a fascinating study of one of the major lamas of twentieth-century Tibet—up to his death a few years before the Cultural Revolution and his eventual reincarnation in Italy. All told from the perspective of traditional hagiography, The Lamp That Enlightens Narrow Minds is filled with extraordinary details of the complex lives of Tibetan religious masters of this period." — Janet Gyatso, Hershey Professor of Buddhist Studies at Harvard University and author of Appartitions of the Self, In the Mirror of Memory, and Women in Tibet  "This is a compelling account of the life of one of the famed Mkhyen-brtse dbang-po incarnations, written by his nephew, a renowned Buddhist teacher himself. If is also a record of spiritual life in Tibet as experienced and lived by a Buddhist master in a traditional environment and then, in his later years, in the turbulent circumstances of displacement and violence that marked the history of Tibet in the second half of the twentieth century." — Elliot Sperling, Assoiciate Professor of Central Eurasian Studies at Indiana University "An important story related to our lineage, with considerable implications." — The Mirror, Newspaper of the International Dzogchen Community About the Author Born in Eastern Tibet in 1938, Chögyal Namkhai Norbu is an internationally known Dzogchen Buddhist teacher and author. The direct descendant of the first Dzogchen Tibetan master of Tibet, Norbu spent his childhood receiving many teachings from masters of various traditions. In the 1960s he was invited to teach in Italy. During his career he wrote many books on Tibetan culture and Dzogchen Buddhism. He is the founder of two nonprofit organizations including the Shang Shung Institute, which is dedicated to the preservation of Tibetan culture.

Long Life, Honey In The Heart

Escaping The Fire: How An Ixil Mayan Pastor Led Hi...

The Lucky Few: Finding God's Best In The Most Unli...

Before
₱ 1,071.00
Pre-order Item
I confirm to purchase this pre-order item.
Other Choices
Return Policy
For more details please visit our page about Cancellations, Returns, and Refunds