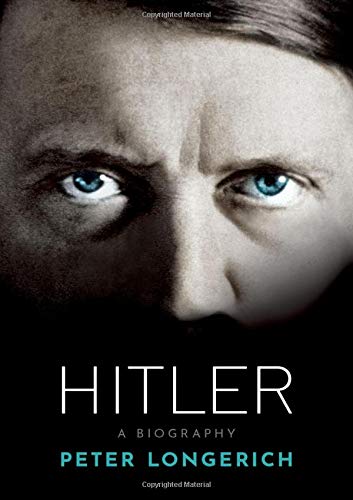 About Hitler: A Biography

Product Description From one of the most prominent biographers of the Nazi period, a new and provocative portrait of the figure behind the century's worst crimes Acclaimed historian Peter Longerich, author of Goebbels and Heinrich Himmler now turns his attention to Adolf Hitler in this new biography. While many previous portraits have speculated about Hitler's formative years, Longerich focuses on his central role as the driving force of Nazism itself. You cannot separate the man from the monstrous movement he came to embody. From his ascendance through the party's ranks to his final hours as F�hrer in April 1945, Longerich shows just how ruthless Hitler was in his path to power. He emphasizes Hitler's political skills as Germany gained prominence on the world's stage. Hitler's rise to, and ultimate hold on, power was more than merely a matter of charisma; rather, it was due to his ability to control the structure he created. His was an image constructed by his regime - an essential piece self-created of propaganda. This comprehensive biography is the culmination of Longerich's life-long pursuit to understand the man behind the century's worst crimes. Review "An essential volume for anyone wanting to build up a picture of this atrocious man..." -- Simon Heffer, The Daily Telegraph "... a real biography by a genuine specialist ..." -- Richard J Evans, The Guardian "... a comprehensive and impressive work. I am happy to say that Hitler: A Life is a very good book, fluently translated by Jeremy Noakes and Lesley Sharpe. It is comprehensive on the domestic side of the story, and it draws on the newer literature of the past two decades ... Longerich's work is much more than a synthesis... The result is a fine-grained and generally persuasive account of Hitler's rise to power..." -- Brendan Simms, Irish Times "Here once again [Longerich] mobilises a formidable quantity of archival material and shows us Hitler in his true colours ... [A] detailed biography." -- Richard Overy, Literary Review "Longerich's meticulous account touches on many issues..." -- Christopher Clark, London Review of Books "... demonstrates a mastery of a vast mass of primary and secondary research... that is remarkable even for a German professor ... Longerich is uniquely equipped to explore the enigma of a Fuhrer who manipulated and ultimately ruined not on his lieutenants but an entire continent..." -- Daniel Johnson, Standpoint "Essential reading." -- Christopher Bray, The Tablet "Throughout, the author wears his impeccable scholarship lightly, creating a fresh picture of one of history's most written-about subjects. A Hitler biography unlikely to be surpassed for quite some time."-- Kirkus, Starred Review "Despite its length, Longerich's book is no ornamental 'door stopper;' it is, rather, an 'eye opener' that sets this book apart from those of many other Hitler biographers." -- Reform Judaism "A chilling but masterful portrait."-- Booklist, Starred Review "Longerich brings distinctive perspectives to the subject, offering compelling insights... A worthwhile and thought-provoking assessment of Hitler's life and times, in the process providing a stark reminder of the consequences of the politics of hate." -- Pittsburgh Post-Gazette "While Longerich agrees that Hitler was an inept administrator, he convincingly argues that the administrative upheaval was a function, not a glitch, of the system, enabling Hitler to act as arbiter of policy conflicts and to insert himself forcefully into policy decisions... Readers and scholars of 20th-century history will welcome this [biography]."-- Library Journal "The English-language translation [of Hitler], a herculean feat accomplished by Jeremy Noakes and Lesley Sharpe, never flags, always smartly conveying Longerich's peculiarly magisterial readability... This is [one of] the most impressive translated biograph[ies] of the year."-- Christian Science Monitor "A fantastic look at how the f�hrer b

Before
₱ 2,578.00
Pre-order Item
I confirm to purchase this pre-order item.
Other Choices
Return Policy
For more details please visit our page about Cancellations, Returns, and Refunds