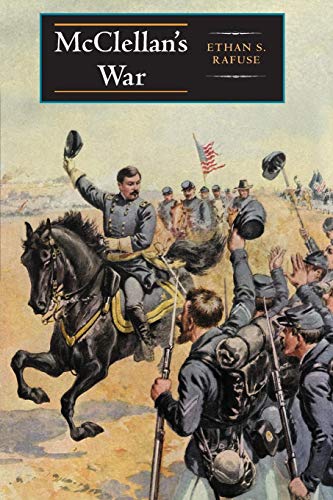 McClellan's War: The Failure of Moderation in the Struggle for the Union

About McClellan's War: The Failure Of Moderation In The

Product description Bold, brash, and full of ambition, George Brinton McClellan seemed destined for greatness when he assumed command of all the Union armies before he was 35. It was not to be. Ultimately deemed a failure on the battlefield by Abraham Lincoln, he was finally dismissed from command following the bloody battle of Antietam. To better understand this fascinating, however flawed, character, Ethan S. Rafuse considers the broad and complicated political climate of the earlier 19th century. Rather than blaming McClellan for the Union's military losses, Rafuse attempts to understand his political thinking as it affected his wartime strategy. As a result, Rafuse sheds light not only on McClellan's conduct on the battlefields of 1861-62 but also on United States politics and culture in the years leading up to the Civil War. Review "An important book that rescues George B. McClellan's military reputation and demonstrates that he was removed from command because he stood for policies―moderation, conciliation, statesmanship―that were anathema to the Lincoln administration." ( Chronicles) "Rafuse is balanced and careful in his judgments, and the book is firmly rooted in deep and thorough research.... Any historian seriously interested in the period will come away from the book with useful material and a better understanding of George B. McClellan." ( Journal of Southern History) "Rafuse's book... offers the most comprehensive account of McClellan's prewar life and military career available, buttressed with a convincing analysis, and is sure to alter current perceptions and future assessments of the general's role in Civil War history." ( Providence Sunday Journal) "In Ethan Rafuse's refreshing new book, we have the story of a man who... was thrust into a war that helped transform American society from an agrarian into an industrial empire. Thus, to really understand the commander, according to Rafuse, one needs to understand the forces that shaped his political and social thought.... Exhaustively researched and lucidly written, Rafuse has done an excellent job in giving us a different perspective on 'Little Mac.'" ( Civil War History) "Rafuse's thoughtful study of Little Mac shows just how enthralling this complex and flawed individual continues to be." ( Blue & Gray magazine) About the Author Ethan S. Rafuse is Professor of Military History at the U.S. Army Command and General Staff College at Fort Leavenworth, Kansas, and the author, editor, or co-editor of eight books on Civil War history, including Antietam, South Mountain, and Harpers Ferry: A Battlefield Guide and Robert E. Lee and the Fall of the Confederacy, 1863-1865.

Nebraska's Missing Public Enemy: The Last Of The G...

Kolb Brothers Of Grand Canyon: Being A Collection ...

Notes On A Foreign Country: An American Abroad In ...

Before
₱ 1,321.00
Pre-order Item
I confirm to purchase this pre-order item.
Other Choices
Return Policy
For more details please visit our page about Cancellations, Returns, and Refunds