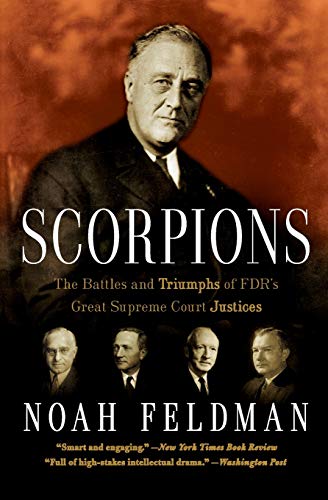 About Scorpions: The Battles And Triumphs Of FDR's Great

Product description A tiny, ebullient Jew who started as America's leading liberal and ended as its most famous judicial conservative. A Klansman who became an absolutist advocate of free speech and civil rights. A backcountry lawyer who started off trying cases about cows and went on to conduct the most important international trial ever. A self-invented, tall-tale Westerner who narrowly missed the presidency but expanded individual freedom beyond what anyone before had dreamed. Four more different men could hardly be imagined. Yet they had certain things in common. Each was a self-made man who came from humble beginnings on the edge of poverty. Each had driving ambition and a will to succeed. Each was, in his own way, a genius. They began as close allies and friends of FDR, but the quest to shape a new Constitution led them to competition and sometimes outright warfare. Scorpians tells the story of these four great justices: their relationship with Roosevelt, with each other, and with the turbulent world of the Great Depression, World War II, and the Cold War. It also serves as a history of the modern Constitution itself. Review "Scorpions is a deft and sophisticated panoramic history of a fascinating era, an important one of Supreme Court jurisprudence, told simply without losing substance . . . Through excellent storytelling and absorbing case histories about interesting, ambitious men grappling with profound and complicated issues-and with each other-Feldman's approach will satisfy constitutional scholars as well as inform readers in the general public. His broad canvas is both accessible and thoughtful."― Washington Lawyer "By so personifying competing modes of constitutional interpretation, Feldman, a law professor, elevates the story from specialty to general interest and, to boot, embroiders technicalities about original intent and the like with animosities that roiled the quartet . . . Taking readers into the conference room, Feldman shows this unpolished side of the Supreme Court in cases of the 1940s, culminating in his account about how Frankfurter achieved unanimity in the landmark desegregation case of Brown v. Board of Education. The interpersonal factor in court politics is knowledgeably displayed in Feldman's intriguing account."― Booklist "The pleasure of this book comes from Feldman's skill as a narrator of intellectual history. With confidence and an eye for telling details he relates the story of the backstage deliberations . . . Feldman is especially good in describing how the clashing personalities and philosophies of his four protagonists were reflected in their negotiations and final opinions . . . This is a first-rate work of narrative history that succeeds in bringing the intellectual and political battles of the post-Roosevelt Court vividly to life."― Publishers Weekly "Of Franklin Roosevelt's nine Supreme Court appointments, four have had lasting influence ... Feldman neatly demonstrates how their careers and personal histories accounted for their mutual resentments and shaped their distinctive approaches to constitutional interpretation. Frankfurter's judicial restraint, Black's originalism, Jackson's pragmatism and Douglas's realism-four interpretive doctrines that continue to reverberate-are fleshed out in accessible discussions of important cases dealing with presidential power and civil rights. The process of how they put aside personal differences and individual philosophies to reach agreement in the historic Brown v. Board of Education is only part of the author's revealing exploration. An immensely readable history that goes behind the façade of our most august institution to reveal the flesh-and-blood characters who make our laws." ― Kirkus (Starred Review) "Noah Feldman's book is more than a fascinating group biography of four complicated, brilliant, and ambitious men, and more than a precise and illuminating account of liberalism and Constitutional law. It's also a window on history-from Sacco and Vanzetti and the Great Depression to Pearl Harbor, the Nuremberg Trials, the Cold War, and the Civil Rights Movement. There is adventure on every page."― Louis Menand, author of The Metaphysical Club "In this splendid biography, Noah Feldman sets out to tell the story of the making of the modern Constitution-and thus of modern America itself-through the lives of Franklin Roosevelt and four of his Supreme Court justices. The result is a terrific tale of politics and principle, personality and vision. The battles of these four 'scorpions' gave us our world, and Feldman's excellent book is a powerful and original contribution to our understanding of the 20th century-and of our own." ― Jon Meacham, Pulitzer Prize winning author of American Lion "FDR appointed larger-than-life characters to the Supreme Court, and SCORPIONS brings them vividly to life - and reminds us why, strangely enough, they matter today more than ever."― Jeffrey Toobin, author of The Nine: Inside the Secret World of the Supreme Court About the Author Noah Feldman is the author of four previous books: The Fall and Rise of the Islamic State (Princeton University Press, 2008), Divided By God (Farrar, Straus, and Giroux, 2005); What We Owe Iraq (Princeton University Press, 2004); and After Jihad (Farrar, Straus, and Giroux, 2003).

The Will Of The People: How Public Opinion Has Inf...

Before
₱ 1,652.00
Pre-order Item
I confirm to purchase this pre-order item.
Other Choices
Return Policy
For more details please visit our page about Cancellations, Returns, and Refunds