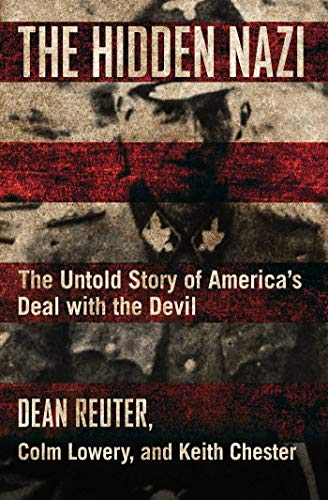 The Hidden Nazi: The Untold Story of America's Deal with the Devil

About The Hidden Nazi: The Untold Story Of America's Deal With The Devil

Product Description He’s the worst Nazi war criminal you’ve never heard of Sidekick to SS Chief Heinrich Himmler and supervisor of Nazi rocket scientist Wernher von Braun, General Hans Kammler was responsible for the construction of Hitler’s slave labor sites and concentration camps. He personally altered the design of Auschwitz to increase crowding, ensuring that epidemic diseases would complement the work of the gas chambers. Why has the world forgotten this monster? Kammler was declared dead after the war. But the aide who testified to Kammler’s supposed “suicide” never produced the general’s dog tags or any other proof of death. Dean Reuter, Colm Lowery, and Keith Chester have spent decades on the trail of the elusive Kammler, uncovering documents unseen since the 1940s and visiting the purported site of Kammler’s death, now in the Czech Republic. Their astonishing discovery: US government documents prove that Hans Kammler was in American custody for months after the war—well after his officially declared suicide. And what happened to him after that? Kammler was kept out of public view, never indicted or tried, but to what end? Did he cooperate with Nuremberg prosecutors investigating Nazi war crimes? Was he protected so the United States could benefit from his intimate knowledge of the Nazi rocket program and Germany’s secret weapons? The Hidden Nazi is true history more harrowing—and shocking—than the most thrilling fiction. Review "It’s strange that no one has yet written a biography of SS General Hans Kammler, one of the brutal masterminds of the German military-industrial complex and the Holocaust.  But when you read The Hidden Nazi you will realize that until now no one had the knowledge, persistence, and sheer nerve that the authors brought to the job of unlocking the multiple mysteries surrounding this evil genius of the Third Reich. It’s a story where Schindler’s List meets Doctor Strangelove.  Read it, be amazed and shocked by what Kammler did,  and outraged by how he escaped final justice; but above all read The Hidden Nazi." -- Arthur Herman, Pulitzer Prize Final historian and author of How the Scots Invented the Modern World and 1917: Lenin, Wilson, and the Birth of the New World Disorder “Werner von Braun called him ‘the greatest rogue and adventurer I have ever seen.’   Albert Speer damned him as ‘one of Himmler’s most brutal and most ruthless henchmen.’  He engineered the Holocaust, built theconcentration camps, and perfected the gas chambers and crematoria.  He pioneered slave labor and masterminded rocket, fighter jet, and secret wonder-weapon production.  And at the end of World War II he vanished without a trace. Enigmatic SS General Hans Kammler is the most diabolic Nazi you’ve never heard of. Dean Reuter takes readers on a gripping, exciting, and suspenseful hunt in search of the mysterious war criminal.    The Hidden Nazi is a fascinating forensic detective story that reads like a great crime thriller. Did Kammler fake his death and survive the war? How did he escape justice? Did America strike a deal with the Devil in exchange for his secrets? Splendidly written with verve and expertise,  The Hidden Nazi is storytelling at its best. Dean Reuter and his co-authors combine superb narrative history with a riveting personal memoir of the harrowing psychological journey into Hans Kammler’s heart of darkness.” -- James L. Swanson, Edgar Award-winning, New York Times bestselling author of Manhunt: The 12 Day Chase for Lincoln’s Killer “Justice delayed is justice denied? Not in this case. At long last, and at the skillful hands of Dean Reuter, aparticularly nasty Nazi has been brought before the bar of history for a lasting sort of justice—the measured but stern judgment of a meticulous historian.” -- George F. Will, Pulitzer Prize–winning columnist “ The Hidden Nazi is a revelation: a spellbinding, at times harrowing new history of an epic we thought had been covered from every angle,

Profiles In Corruption: Abuse Of Power By America'...

The Plot Against The President: The True Story Of ...

Before
₱ 1,500.00
Pre-order Item
I confirm to purchase this pre-order item.
Other Choices
Return Policy
For more details please visit our page about Cancellations, Returns, and Refunds