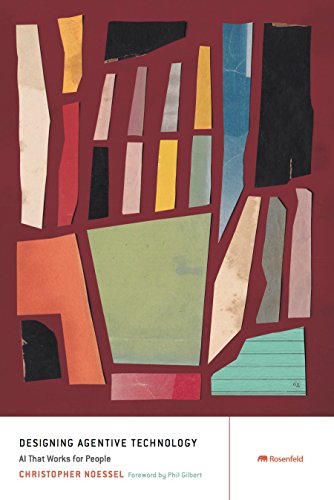 See more product information!
Edition 1st
Number Of Pages 240
Publication Date 2017-05-09
-
No price yet.
Price not yet available.
Pay with

About Designing Agentive Technology: AI That Works For

Product Description Advances in narrow artificial intelligence make possible agentive systems that do things directly for their users (like, say, an automatic pet feeder). They deliver on the promise of user-centered design, but present fresh challenges in understanding their unique promises and pitfalls. Designing Agentive Technology provides both a conceptual grounding and practical advice to unlock agentive technology's massive potential. Review Noessel's book cuts through the AI hype to give practical advice and valuable context on how to apply today's powerful-but-limited AI technology to create useful, helpful, supportive, and valuable services that go way beyond silly chatbots. --Mike Kuniavsky, Xerox PARC A fun, friendly, and accessible guide on how to design for an emerging world where software-enabled machines become intelligent servants, laced with sci-fi wonder and moral dilemmas. --Dave Gray, founder of XPLANE, author of Liminal Thinking, Gamestorming, and The Connected Company Engaging and accessible Designing Agentive Technology takes on one of the most relevant topics of this era by making it fun and understandable. --Adam Cutler, distinguished designer for Cognitive Computing, IBM About the Author Christopher Noessel is a veteran of the interaction design industry, having designed products and services, and helped clients with design strategy across many disparate domains for more than 20 years. In that time, he co-founded a small interaction design agency where he developed interactive exhibitions and environments for museums. He worked as a director of information design at international web consultancy marchFIRST, where he also helped establish the interaction design Center of Excellence. For ten years, he worked with a boutique interaction design agency in San Francisco, where he led the "generator" half of that practice. He is now the Global Design Practice Manager for the Travel and Transportation industry at IBM, working closely with IBM Design. His desk, when he's at it, sits near the San Francisco home of Watson. Christopher was one of the founding graduates of the now-passing-into-legend Interaction Design Institute Ivrea in Ivrea, Italy, where his thesis project was a comprehensive service design for lifelong learners called Fresh. The project was presented at the mLearn conference in London in 2003. He has since helped to visualize the future of counterterrorism as a freelancer, built prototypes of coming technologies for Microsoft, and designed telehealth devices to accommodate the crazy facts of modern health care. Christopher has written for online publications for many years, but was first published in print as a coauthor of the interaction design pattern chapter in the textbook edited by Simson Garfinkel, RFID: Applications, Security, and Privacy. His Spidey sense goes off at random topics, and this has led him to speak at conferences around the world about a wide range of things, including interactive narrative, ethnographic user research, interaction design, pair design, sex-related interactive technologies, free-range learning, the future of tech, artificial intelligence, and the relationship between science fiction and interface design with the 2012 Rosenfeld Media book Make It So: Interaction Design Lessons from Science Fiction, coauthored with Nathan Shedroff. He is keeper of the blog scifiinterfaces.com and runs related sci-fi movie nights all over the world. In 2014, he coauthored the 4th Edition of About Face: The Essentials of Interaction Design, helping modernize it for the six years that had passed since its prior release. If you run into him on the street and want to get an earful, ask about any of the handful of other books he s got rattling around in his head. One involves the strange and wonderful world of generative randomness, and another involves the design of technology that helps its users get smart enough not to need it anymore.

₱ 3,353.00
Pre-order Item
I confirm to purchase this pre-order item.
Other Choices
Return Policy
For more details please visit our page about Cancellations, Returns, and Refunds