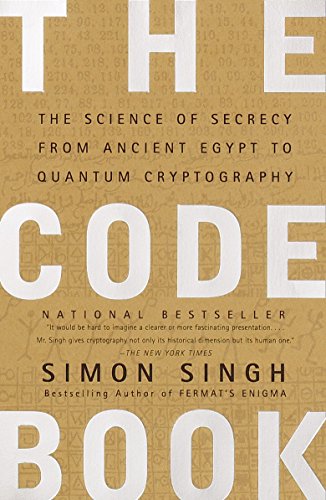 The Code Book: The Science of Secrecy from Ancient Egypt to Quantum Cryptography

The Code Book: The Science of Secrecy from Ancient Features

About The Code Book: The Science Of Secrecy From Ancient

Product Description In his first book since the bestselling Fermat's Enigma, Simon Singh offers the first sweeping history of encryption, tracing its evolution and revealing the dramatic effects codes have had on wars, nations, and individual lives. From Mary, Queen of Scots, trapped by her own code, to the Navajo Code Talkers who helped the Allies win World War II, to the incredible (and incredibly simple) logisitical breakthrough that made Internet commerce secure, The Code Book tells the story of the most powerful intellectual weapon ever known: secrecy. Throughout the text are clear technical and mathematical explanations, and portraits of the remarkable personalities who wrote and broke the world's most difficult codes. Accessible, compelling, and remarkably far-reaching, this book will forever alter your view of history and what drives it.  It will also make you wonder how private that e-mail you just sent really is. Amazon.com Review People love secrets. Ever since the first word was written, humans have sent coded messages to each other. In The Code Book, Simon Singh, author of the bestselling Fermat's Enigma, offers a peek into the world of cryptography and codes, from ancient texts through computer encryption. Singh's compelling history is woven through with stories of how codes and ciphers have played a vital role in warfare, politics, and royal intrigue. The major theme of The Code Book is what Singh calls "the ongoing evolutionary battle between codemakers and codebreakers," never more clear than in the chapters devoted to World War II. Cryptography came of age during that conflict, as secret communications became critical to both sides' success. Confronted with the prospect of defeat, the Allied cryptanalysts had worked night and day to penetrate German ciphers. It would appear that fear was the main driving force, and that adversity is one of the foundations of successful codebreaking. In the information age, the fear that drives cryptographic improvements is both capitalistic and libertarian--corporations need encryption to ensure that their secrets don't fall into the hands of competitors and regulators, and ordinary people need encryption to keep their everyday communications private in a free society. Similarly, the battles for greater decryption power come from said competitors and governments wary of insurrection. The Code Book is an excellent primer for those wishing to understand how the human need for privacy has manifested itself through cryptography. Singh's accessible style and clear explanations of complex algorithms cut through the arcane mathematical details without oversimplifying. --Therese Littleton Review "It would be hard to imagine a clearer or more fascinating presentation. . . . Mr. Singh gives cryptography not only its historical dimension but its human one." -- The New York Times "Entertaining and satisfying. . . . Offers a fascinating glimpse into the mostly secret competition between codemakers and codebreakers."        -- USA Today    "A good read that, bless it, makes the reader feel a bit smarter when it's done. Singh's an elegant writer and well-suited to the task of leading the mathematically perplexed through areas designed to be tricky."        -- Seattle Weekly    "An absorbing tale of codemaking and codebreaking over the centuries." -- Scientific American "Singh spins tales of cryptic intrigue in every chapter." -- The Wall Street Journal "Brings together...the geniuses who have secured communications, saved lives, and influenced the fate of nations. A pleasure to read." -- Chicago Tribune "Enthralling...commendably lucid...[Singh's] book provides a timely and entertaining summary of the subject." -- The Economist From the Inside Flap book since the bestselling Fermat's Enigma, Simon Singh offers the first sweeping history of encryption, tracing its evolution and revealing the dramatic effects codes have had on wars, nations, and individual lives. From

The Code Book: The Secrets Behind Codebreaking

Cryptanalysis: A Study Of Ciphers And Their Soluti...

₱ 1,151.00
Pre-order Item
I confirm to purchase this pre-order item.
Other Choices
Return Policy
For more details please visit our page about Cancellations, Returns, and Refunds