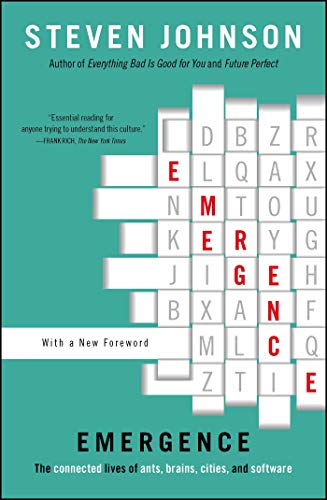 Emergence: The Connected Lives of Ants, Brains, Cities, and Software

Emergence: The Connected Lives of Features

About Emergence: The Connected Lives Of

Product Description In the tradition of Being Digital and The Tipping Point, Steven Johnson, acclaimed as a "cultural critic with a poet's heart" (The Village Voice), takes readers on an eye-opening journey through emergence theory and its applications. A NEW YORK TIMES NOTABLE BOOKA VOICE LITERARY SUPPLEMENT TOP 25 FAVORITE BOOKS OF THE YEARAN ESQUIRE MAGAZINE BEST BOOK OF THE YEAR Explaining why the whole is sometimes smarter than the sum of its parts, Johnson presents surprising examples of feedback, self-organization, and adaptive learning. How does a lively neighborhood evolve out of a disconnected group of shopkeepers, bartenders, and real estate developers? How does a media event take on a life of its own? How will new software programs create an intelligent World Wide Web? In the coming years, the power of self-organization -- coupled with the connective technology of the Internet -- will usher in a revolution every bit as significant as the introduction of electricity. Provocative and engaging, Emergence puts you on the front lines of this exciting upheaval in science and thought. Review Michiko Kakutani The New York Times Book Review Johnson once again demonstrates his range as a cultural historian....stimulating reading. Edward Dolnick The Washington Post Johnson is a clear, lively writer with an aversion to jargon and a knack for crafting offbeat analogies....clever and thought-provoking. Tom Standage The Economist A dizzying, dazzling romp through fields as disparate as urban planning, computer game design, neurology, and control theory. David Pogue The New York Times Johnson opens our eyes to swarm-logic behavior in our own lives...with wit, clarity, and enthusiasm. About the Author Steven Johnson is the bestselling author of Interface Culture, Emergence, and Everything Bad Is Good for You as well as a columnist for Discover and a contributing editor at Wired. He lives in New York City with his wife and two sons, and can be reached via the Web at www.stevenberlinjohnson.com. Excerpt. © Reprinted by permission. All rights reserved. Introduction: Here Comes Everybody! In August of 2000, a Japanese scientist named Toshiyuki Nakagaki announced that he had trained an amoebalike organism called slime mold to find the shortest route through a maze. Nakagaki had placed the mold in a small maze comprising four possible routes and planted pieces of food at two of the exits. Despite its being an incredibly primitive organism (a close relative of ordinary fungi) with no centralized brain whatsoever, the slime mold managed to plot the most efficient route to the food, stretching its body through the maze so that it connected directly to the two food sources. Without any apparent cognitive resources, the slime mold had "solved" the maze puzzle. For such a simple organism, the slime mold has an impressive intellectual pedigree. Nakagaki's announcement was only the latest in a long chain of investigations into the subtleties of slime mold behavior. For scientists trying to understand systems that use relatively simple components to build higher-level intelligence, the slime mold may someday be seen as the equivalent of the finches and tortoises that Darwin observed on the Galápagos Islands. How did such a lowly organism come to play such an important scientific role? That story begins in the late sixties in New York City, with a scientist named Evelyn Fox Keller. A Harvard Ph.D. in physics, Keller had written her dissertation on molecular biology, and she had spent some time exploring the nascent field of "nonequilibrium thermodynamics," which in later years would come to be associated with complexity theory. By 1968, she was working as an associate at Sloan-Kettering in Manhattan, thinking about the application of mathematics to biological problems. Mathematics had played such a tremendous role in expanding our understanding of physics, Keller thought -- so perhaps it might also be useful for understandin

A Thousand Years Of Nonlinear History

Before
₱ 1,614.00
Pre-order Item
I confirm to purchase this pre-order item.
Other Choices
Return Policy
For more details please visit our page about Cancellations, Returns, and Refunds