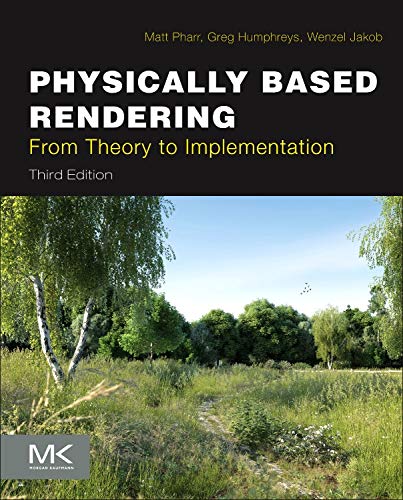 Physically Based Rendering: From Theory to Implementation

Physically Based Rendering: From Theory to Features

About Physically Based Rendering: From Theory To

Product Description Physically Based Rendering: From Theory to Implementation, Third Edition, describes both the mathematical theory behind a modern photorealistic rendering system and its practical implementation. Through a method known as 'literate programming', the authors combine human-readable documentation and source code into a single reference that is specifically designed to aid comprehension. The result is a stunning achievement in graphics education. Through the ideas and software in this book, users will learn to design and employ a fully-featured rendering system for creating stunning imagery. This completely updated and revised edition includes new coverage on ray-tracing hair and curves primitives, numerical precision issues with ray tracing, LBVHs, realistic camera models, the measurement equation, and much more. It is a must-have, full color resource on physically-based rendering. Review "Physically Based Rendering is a terrific book. It covers all the marvelous math, fascinating physics, practical software engineering, and clever tricks that are necessary to write a state-of-the-art photorealistic renderer. All of these topics are dealt with in a clear and pedagogical manner without omitting the all-important practical details." --Per Christensen, Senior Software Developer, RenderMan Products, Pixar Animation Studios "This book has deservedly won an Academy Award. I believe it should also be nominated for a Pulitzer Prize." --Donald Knuth Review This comprehensive, updated, and expanded edition of the bestselling flagship book on physically-based rendering systems provides a complete guide to both concepts and code, including ray-tracing hair and curves primitives, numerical precision issues with ray tracing, LBVHs, realistic camera models, the measurement equation, and much more About the Author Matt Pharr is a Software Engineer at Google. He previously co-founded Neoptica, which was acquired by Intel, and co-founded Exluna, which was acquired by NVIDIA. He has a B.S. degree from Yale and a Ph.D. from the Stanford Graphics Lab, where he worked under the supervision of Pat Hanrahan. Wenzel Jakob is an assistant professor at EPFL's School of Computer and Communication Sciences. His research interests revolve around material appearance modeling, rendering algorithms, and the high-dimensional geometry of light paths. Wenzel obtained his Ph.D. at Cornell University under the supervision of Steve Marschner, after which he joined ETH Zürich for postdoctoral studies under the supervision of Olga Sorkine Hornung. Wenzel is also the lead developer of the Mitsuba renderer, a research-oriented rendering system. Greg Humphreys is Director of Engineering at FanDuel, having previously worked on the Chrome graphics team at Google and the OptiX GPU raytracing engine at NVIDIA. Before that, he was a professor of Computer Science at the University of Virginia, where he conducted research in both high performance and physically based computer graphics, as well as computer architecture and visualization. Greg has a B.S.E. degree from Princeton, and a Ph.D. in Computer Science from Stanford under the supervision of Pat Hanrahan. When he's not tracing rays, Greg can usually be found playing tournament bridge.