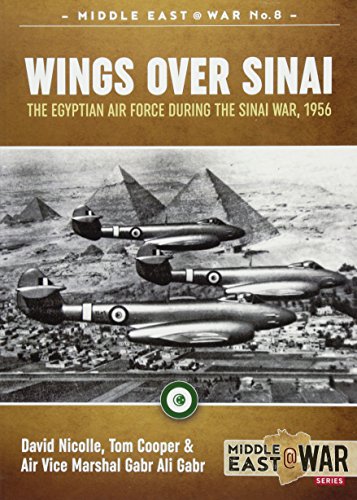 Wings Over Sinai: The Egyptian Air Force During The Features

About Wings Over Sinai: The Egyptian Air Force During The

Product Description Sixty years since the tripartite aggression of France, Great Britain and Israel against Egypt, this is the first account about Egyptian military operations during the Suez War of 1956 (or ‘Suez Crisis’, as it is known in the West). Based on research with the help of official Egyptian documentation and recollections of crucial participants, this book provides an unique and exclusive insight into the ‘other side’ of a war that many consider has marked ‘the end of the British Empire’. From the Western point of view, the situation is usually explained in quite simple terms: in retaliation for President Gamal Abdel Nasser’s nationalization of the Universal Suez Canal Company - and thus the strategically important waterway of the Suez Canal - France and Great Britain (operating in concert with Israel) launched the operation codenamed 'Musketeer'. Divided into three phases, each shaded into the other; this aimed at obliterating the Egyptian Air Force, occupying the whole of the Suez Canal and toppling Nasser’s government. From the Egyptian point of view, backgrounds were much more complex than this. Striving to modernize the country, a new and inexperienced government in Cairo launched a number of major projects, including one for the construction of a gigantic Asswan Dam on the Nile. The only Western power ready to help finance this project, the USA conditioned its support with basing rights for its military. With the last British soldiers still about to leave the country - and thus end Egypt’s occupation by foreign powers for the first time in 2,000 years - Nasser found this unacceptable. Around the same time, Egypt found itself under pressure from Israeli raids against border posts on the Sinai. Left without a solution, Cairo decided to nationalize the Suez Canal in order to finance the Aswan Dam project, but also to start purchasing arms from the Soviet Union. In an attempt to bolster Egyptian defenses without antagonizing Western powers, Nasser concluded the so-called ‘Czech Arms deal’ with Moscow - resulting in the acquisition of Soviet arms via Czechoslovakia. Little known in Cairo at the time, such moves tripped several ‘red lines’ in Israel and in the West - in turn prompting aggression that culminated in a war. Wings over Sinai is, first and foremost, an account of the battle for survival of the Egyptian Air Force (EAF). Caught in the middle of conversion to Soviet-types, this proved more than a match for Israel, but were hopelessly ill-prepared to face the military might of Great Britain and France too. Sustained, days-long air strikes on Egyptian air bases caused heavy damage, but were nowhere near as crippling as the losses usually claimed and assessed by the British, French and Israelis. The EAF not only survived that conflict in quite a good order, but also quickly recovered. This story is told against the backdrop of the fighting on the ground and the air and naval invasion by British and French forces. Richly illustrated with plenty of new and previously unpublished photographs, maps (and 15 color profiles), this action-packed volume is illustrates all aspects of camouflage, markings and various equipment of British and Soviet origin in Egyptian military service as of 1956. Review "I was just ten years old in 1956, but I do remember very well, the newspaper headlines and the news broadcasts of the time talking about the "Suez Crisis", and this fine book confirms, indeed that the crisis really was the final nail in the coffin of the British Empire. Comprehensive and very readable." Books Monthly “With this one written very much from the Egyptian point of view, I found this an interesting one to read, throwing some new light on this episode in the history of the Middle East conflicts. As a modeller the colour profiles and the many photos are very handy references.” Military Model Scene April 2017 “This is an excellent book of a relatively obscure area of military history which will be int

MiG-23 Flogger In The Middle East: Mikoyan I Gurev...