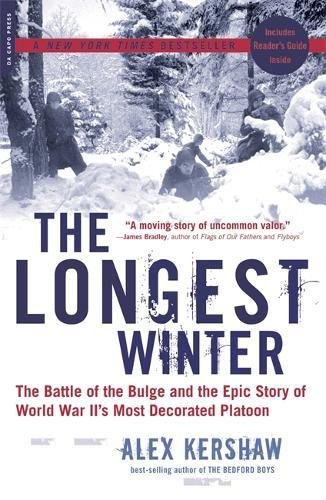 The Longest Winter: The Battle of the Bulge and the Epic Story of WWII's Most Decorated Platoon

The Longest Winter: The Battle of the Bulge and the Features

About The Longest Winter: The Battle Of The Bulge And The

Product Description The epic story of the vastly outnumbered platoon that stopped Germany's leading assault in the Ardennes forest and prevented Hitler's most fearsome tanks from overtaking American positions On a cold morning in December, 1944, deep in the Ardennes forest, a platoon of eighteen men under the command of twenty-year-old lieutenant Lyle Bouck were huddled in their foxholes trying desperately to keep warm. Suddenly, the early morning silence was broken by the roar of a huge artillery bombardment and the dreadful sound of approaching tanks. Hitler had launched his bold and risky offensive against the Allies-his "last gamble"-and the small American platoon was facing the main thrust of the entire German assault. Vastly outnumbered, they repulsed three German assaults in a fierce day-long battle, killing over five hundred German soldiers and defending a strategically vital hill. Only when Bouck's men had run out of ammunition did they surrender to the enemy. As POWs, Bouck's platoon began an ordeal far worse than combat-survive in captivity under trigger-happy German guards, Allied bombing raids, and a daily ration of only thin soup. In German POW camps, hundreds of captured Americans were either killed or died of disease, and most lost all hope. But the men of Bouck's platoon survived-miraculously, all of them. Once again in vivid, dramatic prose, Alex Kershaw brings to life the story of some of America's little-known heroes-the story of America's most decorated small unit, an epic story of courage and survival in World War II, and one of the most inspiring stories in American history. Review "This book is a must-read for anyone who wants a renewed sense of patriotism." ― Roanoke Times, - "Kershaw is a fantastic storyteller and excels at describing small-unit action. Anyone who enjoyed The Bedford Boys would like this book." ― Army Magazine, - "America's enemies would do well not to underestimate this [platoon's] sense of courage3 and duty." ― Wall Street Journal, - "Gripping and unsentimental...Shows that valor comes in many forms." ― New York Sun, - "Kershaw handles both combat and internment skillfully and respectfully. A good read for observing the 60th anniversary of the Bulge." ― Booklist, - "Kershaw has written a concise and winning account, one based largely on interviews with the platoon members. He vividly depicts the battlefield heroism and subsequent survival of these valiant American troops. Those interested in military history will find much here that is pleasing and heretofore uncelebrated." ― San Francisco Chronicle, - "A gripping, true life saga." ― Midwest Book Review, - "Kershaw...once again has succeeded in producing a fascinating, little known story. Amazing." ― Topeka Capital-Journal, - "Kershaw skillfully tells the vivid and inspiring story." ― Military Officer Magazine, - "This is a well-written book detailing the individual exploits of both American and German combatants. I required a second reading to better grasp the details of the individual experiences. I think that perhaps a third or fourth reading will be necessary to fully appreciate the impact of this incredible true story." ― Curled Up With a Good Book, - About the Author Alex Kershaw is the author of the widely acclaimed bestsellers The Bedford Boys, The Longest Winter, The Few, and Escape from the Deep, among others. He lives in Massachusetts.

Before
₱ 564.00
Pre-order Item
I confirm to purchase this pre-order item.
Other Choices
Return Policy
For more details please visit our page about Cancellations, Returns, and Refunds