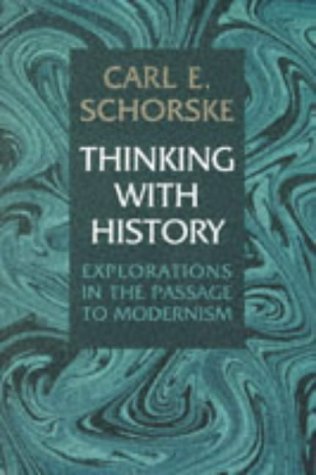 Thinking with History: Explorations in the Passage to Modernism

Thinking with History: Explorations in the Features

About Thinking With History: Explorations In The

Product Description In this book, the distinguished historian Carl Schorske--author of the Pulitzer Prize-winning Fin-de-Siécle Vienna--draws together a series of essays that reveal the changing place of history in nineteenth-and twentieth-century cultures. In most intellectual and artistic fields, Schorske argues, twentieth-century Europeans and Americans have come to do their thinking without history. Modern art, modern architecture, modern music, modern science--all have defined themselves not as emerging from or even reacting against the past, but as detached from it in a new, autonomous cultural space. This is in stark contrast to the historicism of the nineteenth century, he argues, when ideas about the past pervaded most fields of thought from philosophy and politics to art, music, and literature. However, Schorske also shows that the nineteenth century's attachment to thinking with history and the modernist way of thinking without history are more than just antitheses. They are different ways of trying to address the problems of modernity, to give shape and meaning to European civilization in the era of industrial capitalism and mass politics. Schorske begins by reflecting on his own vocation as it was shaped by the historical changes he has seen sweep across political and academic culture. Then he offers a European sampler of ways in which nineteenth-century European intellectuals used conceptions of the past to address the problems of their day: the city as community and artifact; the function of art; social dislocation. Narrowing his focus to Fin-de-Siécle Vienna in a second group of essays, he analyzes the emergence of ahistorical modernism in that city. Against the background of Austria's persistent, conflicting Baroque and Enlightenment traditions, Schorske examines three Viennese pioneers of modernism--Adolf Loos, Gustav Mahler, and Sigmund Freud--as they sought new orientation in their fields. In a concluding essay, Schorske turns his attention to thinking about history. In the context of a postmodern culture, when other disciplines that had once abandoned history are discovering new uses for it, he reflects on the nature and limits of history for the study of culture. Originally published in 1998. The Princeton Legacy Library uses the latest print-on-demand technology to again make available previously out-of-print books from the distinguished backlist of Princeton University Press. These editions preserve the original texts of these important books while presenting them in durable paperback and hardcover editions. The goal of the Princeton Legacy Library is to vastly increase access to the rich scholarly heritage found in the thousands of books published by Princeton University Press since its founding in 1905. From Kirkus Reviews Thirteen pieces by a first-rate scholar on diverse aspects of the intellectual and cultural history of western and central Europe, mainly from 1848 to 1914. Schorske, author of Fin-de-Sicle Vienna: Politics and Culture (1980), for which he was awarded a Pulitzer Prize, and other works, has three foci: his own evolution as a historian and his impressively open response to the ``new history'' that has emerged during the past three decades; perceptions of, and design battles over, the modern city; and the early, formative years of modernist culture. Two of his most interesting pieces focus on the architectural shaping of the Ringstrasse, the grand boulevard that encircled the heart of post-1848 Vienna. Its magisterial buildings, Schorske says, largely reflected the values of both those loyal to Kaiser Franz Josef and those committed to a more liberal, though hardly fully democratic, state; both tendencies would be sharply criticized beginning around 1890 by such modernist intellectuals as the architect Adolf Loos and the journalist and playwright Karl Kraus. Only three of Schorske's essays focus on one or more individualsthe English writer and utopian visionary William Morris, Wa

Before
₱ 1,859.00
Pre-order Item
I confirm to purchase this pre-order item.
Big Discount!
This product, Thinking with History: Explorations in the Passage to Modernism, is currently discounted at 58% off! We don't know when it will go back to its original price so order now to secure it at this price! We'll make sure to order it immediately!
Other Choices
Return Policy
For more details please visit our page about Cancellations, Returns, and Refunds