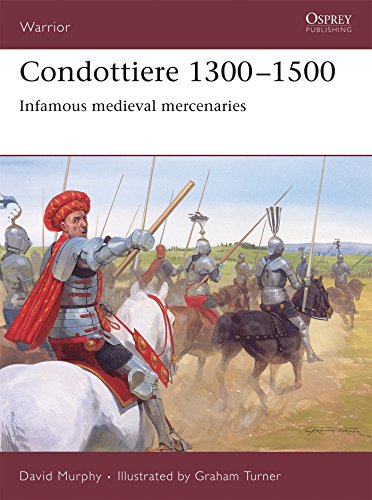 Product Description Originally hired by wealthy Italian city states to protect their assets during a time of ceaseless warring, the Condottiere of the Italian peninsula became famous for his wealth, venality and amorality during the 14th century.The Condottieri's pursuit of profit meant they were prepared to change sides for the right price, even during battle, and they prospered, becoming both powerful and rich in the process. Leaders such as John Hawkwood, with his famous 'White Company', became major political figures.Once at the peak of their power, they often worked together to protect their comfortable position by staging a number of visually impressive but almost bloodless battles, thereby avoiding the real thing. It was because of this, and their reliance on medieval tactics and weaponry, including grand armoured knights, that they were eventually wiped out or dispersed by the more modern armies.Lavishly illustrated with contemporary depictions and original artwork, this title examines the complex military organization, recruitment, training and weaponry of the Condottieri. With insight into their origins and motivations, the author, Dr David Murphy, brings together the social, political and military history of these powerful and unscrupulous men who managed to influence Italian society and warfare for over two centuries. Review “The author does a superlative job of telling the story of these men and the somewhat unusual life they led, for these mercenary armies were not common elsewhere in Europe at the time... Overall a book that covers a lesser known, but still important part of Western history and one that I'm sure you will enjoy reading.” ―Scott Van Aken, modelingmadness.com (August 2007)“David Murphy's Condottiere 1300-1500 - Infamous Medieval Mercenaries surveys those early fighting men who were conscripted by wealthy Italian city states to protect assets during war, providing a blend of military and political history.” ―The Bookwatch (December 2007) About the Author Graham Turner is a leading historical artist, specializing in the medieval period. He has illustrated numerous titles for Osprey, covering a wide variety of subjects from the dress of the 10th-century armies of the Caliphates, through the action of bloody medieval battles, to the daily life of the British Redcoat of the late 18th century. The son of the illustrator Michael Turner, Graham lives and works in Buckinghamshire, UK.

₱ 1,542.00
Pre-order Item
I confirm to purchase this pre-order item.
Other Choices
Return Policy
For more details please visit our page about Cancellations, Returns, and Refunds