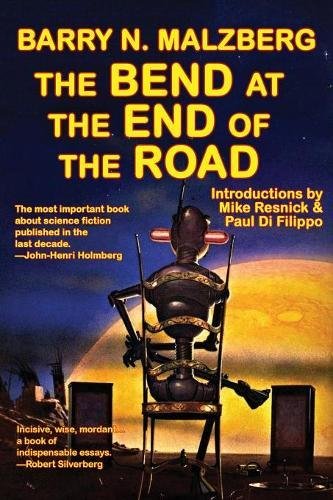 The Bend at the End of the Road

About The Bend At The End Of The Road

Barry N. Malzberg's fiction earned him the 1973 John W. Campbell Memorial Award, nominations for the Philip K. Dick and Theodore Sturgeon Awards, as well as two Hugo and six Nebula Award nominations. Born in 1939, he earned a degree from Syracuse University, worked for the New York City government, and made his first professional fiction sale in 1966. He wrote fiction in a variety of genres under several pseudonyms, and also worked as an agent, editor, and reviewer.But he is perhaps best known for his essays. His two earlier collections of essays, The Engines of the Night (1982) and Breakfast in the Ruins (2007) both won the Locus Award, and both were finalists for the Hugo Award.Collected here are nearly fifty of Malzberg's latest essays. They may upset you, may depress you, may shock you, but they will make you think, and lead you to a different view of the world. Also included are introductions by Mike Resnick and Paul Di Filippo."The impressions and insights that abound in these columns make this book indispensable for any fan of science fiction." --Publishers Weekly..".it is very hard not to argue with Barry Malzberg's The Bend at the End of the Road--and it was just as hard to stop reading it.... it is often strikingly written and shot through with sharp observations of and confrontations with the marginal culture and economic status that has often constrained the field's aspirations. It is this merging of the interesting and insightful with the depressive and depressing that makes the collection as exasperating as it is fascinating.... the writing is dense with allusions from all over the literary-cultural landscape, products of a mind that frantically connects everything to everything. A single page of one essay contains a crescendo of references: nine writers, four composers, four books, two media franchises, plus Donald Trump, Tammany Hall, and ComicCon. Prose like this can be, despite the general atmosphere of futility and disappointing, exhilarating." --Russell Letson in Locus, June 2018"Incisive, wise, mordant, informed by a deep understanding of science fiction in all its aspects--a book of indispensable essays." --Robert Silverberg, SFWA Grand Master"Elegies and rants, a prose that Mencken might envy, seemingly eidetic recall for everything that has ever happened in science fiction's garish, slightly down-at-the-heels cabaret, plus an outlook on life as clear-eyed and weary-hearted as Edward Hopper's--you'll find them all in The Bend at the End of the Road. Barry Malzberg is sf's institutional memory, and in these pages, he transports us back to those thrilling days of yesteryear, when the stars were our destination and every story seemed a door into summer. But he also casts a cold eye on the fiction and fandom de nos jours. Here, then, is a full house of wise, provocative, and plangent essays--read 'em and weep." --Michael Dirda, Pulitzer Prize-winning literary journalist"In this book, Barry Malzberg will tell you what science fiction once was, why it changed, what it changed into, and why it's no longer what it could have been. He won't talk down to you. He'll expect you to pay attention and use your intelligence. And, as he says, 'linear argument or exposition can be a bitch.' So he'll walk you around the subject, leading you gradually into his argument and his viewpoint. It's an important one. Along the way, you'll learn the names of authors you'd love and work that will consume you. And by the end, you'll have read the most important book about science fiction published in the last decade." --John-Henri Holmberg, Swedish author, critic, publisher, and translator

Before
₱ 913.00
Pre-order Item
I confirm to purchase this pre-order item.
Other Choices
Return Policy
For more details please visit our page about Cancellations, Returns, and Refunds