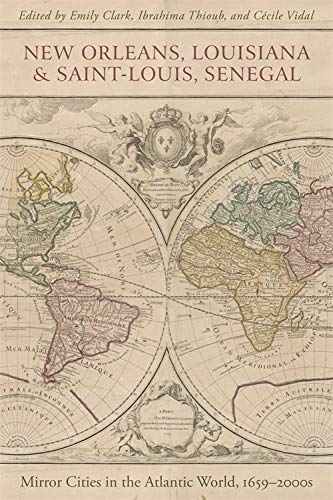 This book explores the intertwined histories of Saint-Louis, Senegal, and New Orleans, Louisiana. Although separated by an ocean, both cities were founded during the early French imperial expansion of the Atlantic world. Both became important port cities of their own continents, the Atlantic world as a whole, and the African diaspora. The slave trade not only played a crucial role in the demographic and economic growth of Saint-Louis and New Orleans, but also directly connected the two cities. The Company of the Indies ran the Senegambia slave-trading posts and the Mississippi colony simultaneously from 1719 to 1731. By examining the linked histories of these cities over the longue durée, this edited collection shows the crucial role they played in integrating the peoples of the Atlantic world. The essays also illustrate how the interplay of imperialism, colonialism, and slaving that defined the early Atlantic world operated and evolved differently on both sides of the ocean. The chapters in part one, “Negotiating Slavery and Freedom,” highlight the centrality of the institution of slavery in the urban societies of Saint-Louis and New Orleans from their foundation to the second half of the nineteenth century. Part two, “Elusive Citizenship,” explores how the notions of nationality, citizenship, and subjecthood―as well as the rights or lack of rights associated with them―were mobilized, manipulated, or negotiated at key moments in the history of each city. Part three, “Mythic Persistence,” examines the construction, reproduction, and transformation of myths and popular imagination in the colonial and postcolonial cities. It is here, in the imagined past, that New Orleans and Saint-Louis most clearly mirror one another. The essays in this section offer two examples of how historical realities are simplified, distorted, or obliterated to minimize the violence of the cities’ common slave and colonial past in order to promote a romanticized present. Wit