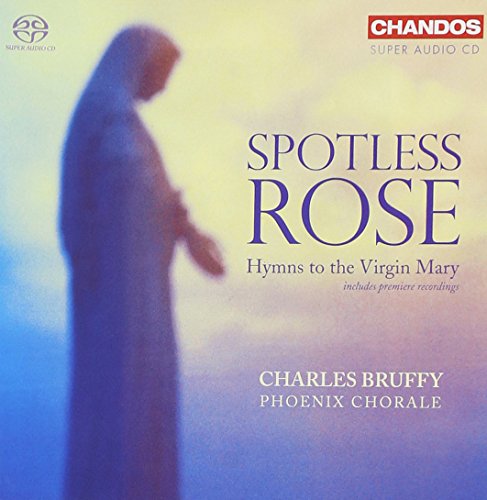 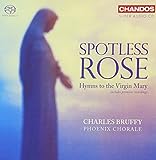 About Spotless Rose: Hymns To The Virgin Mary

Product Description Charles Bruffy and Phoenix Chorale , Spotless Rose: Hymns to the Virgin Mary 2009 GRAMMY award winner: Best Small Ensemble Performance Review The Phoenix Chorale (formerly the Phoenix Bach Choir) and its director Charles Bruffy have made some fine recordings for Chandos, and here is another. While the program suggests a Christmas theme--the Howells and Britten pieces especially--the majority of the works are settings of texts from the Marian liturgy or other Biblical passages that may be sung at other times of year. Interestingly, the more familiar pieces--the Britten, Howells, and Willan--receive the least affecting performances: A Hymn to the Virgin just seems a little rushed and routinely inflected; likewise A Spotless Rose doesn't find the right tempo and therefore doesn't flow easily like it should; the Willan motets are generally fine but don't take advantage of the expressive possibilities inherent in the irregular phrasing and the composer's free metrical form. Most listeners will find extraordinary pleasure in the rest of this substantial program. Stephen Paulus creates a rich-colored atmosphere, expressing his text (a 14th-century lauda) with beautiful and often unexpected harmonies and rhythms that reflect both modern and medieval style. British composer Cecilia McDowall's Three Latin Motets owe much to the current trend in choral music toward closely-voiced dissonances alternating with full major and minor harmonies with added sixths, seconds, and ninths. Like the Paulus work and Jean Belmont Ford's Electa, McDowall's motets are very much text focused, both in terms of rhythm and patterns of phrasing and inflection. The second motet, Ave Maria, sounds like it could be a work by Arvo Pärt, with slightly more dissonance. Ford's Electa was written for Bruffy's Kansas City Chorale, and it receives its premiere recording here. In four sections, it also utilizes a mixed harmonic palette as well as a wide variety of voicings to make for moving and often riveting settings of its carefully chosen texts: De profundis; Asperges me, Domine/Credo; Ave, dulcissima Maria; and Magnificat. Her choice to accompany parts of this work with a bass drum and timpano is inspired and very effective. For me, the highlights of the disc are Javier Busto's two Marian pieces, Ave, maris stella (receiving its premiere recording) and Ave, Maria. Written (as his works usually are) with such seeming simplicity and yet overwhelming beauty--an unusual, deeply felt, knowing understanding of voices that many choral composers just don't have--these two pieces will certainly have you pressing the repeat button many times. The notes by Kathryn Parke also must be cited for their extraordinarily engaging and interesting discussion of the music and the subject of Marian legend. Don't miss this. -- ClassicsToday.com, David Vernier, October 2008The booklet biography here points out that the Phoenix Chorale, formerly the Phoenix Bach Choir, is the first North American chorus to record for Chandos, the audiophile home of English cathedral choirs and other representatives of British tradition. That's noteworthy enough in itself, and better still is that the program here is not one that would be likely to come from a British group. Unified by its Marian idea, the program mixed classic British and contemporary American pieces in a novel way, and it provides an excellent window for the world on the vigorous tradition of a cappella choral music that has evolved independently of academic trends and their strictures. All the music here exploits, to a greater or lesser degree, the acoustic effects possible with an a cappella chorus in a large space, and Chandos, turning its engineers loose in an Arizona desert megachurch called the Camelback Bible Church, achieves spectacular results. The standout is perhaps the final four-movement Electa, by Kansas City composer Jean Belmont Ford, with its intense passages of overlap between a solo soprano 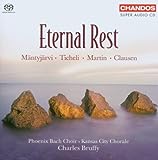 ₱ 1,504.00
Pre-order Item
I confirm to purchase this pre-order item.
Other Choices
Return Policy
For more details please visit our page about Cancellations, Returns, and Refunds