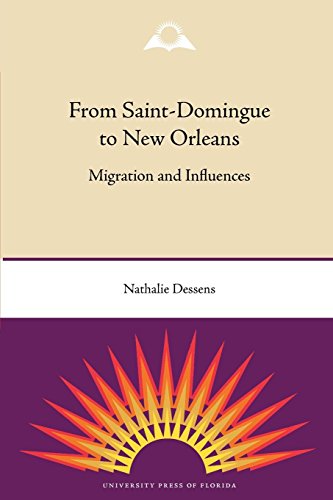 From Saint-Domingue to New Orleans: Migration and Influences (Southern Dissent)

From Saint-Domingue to New Orleans: Migration and Features

About From Saint-Domingue To New Orleans: Migration And

Dessens examines the legacy of approximately 15,000 Saint-Domingue refugees--whites, slaves, and free people of color--who settled in Louisiana between 1791 and 1815. Forced to flee their French Caribbean colony following a slave rebellion that gave birth to the Haitian Republic in January 1804, they spread throughout the Caribbean and along the North American Atlantic coast. Forming a relatively coherent diaspora for at least two decades, they concentrated in New Orleans. In this first comprehensive study of the Saint-Domingue influence, Dessens brings to light a refugee community composed in almost equal proportions of three population groups, yet completely forgotten by Louisiana historiography for more than 150 years, despite its arrival during a crucial historical era, its participation in the economic, social, and political life of a new homeland, and its cultural legacy to the “Creole capital.”  A few pioneer historians of Louisiana raised the Saint-Domingue refugees from oblivion in the mid-20th century, but only one collection of articles, The Road to Louisiana, has ever been published about them. Dessens finds that the new arrivals established New Orleans’ first newspapers and many of its oldest schools and left their cultural influence on the city’s music and architecture. The immigrants also brought with them inclusive ideas about people of African descent that helped shape local race relations. The children of these refugees carefully orchestrated shoemaker Homer Plessy’s vain attempt to outlaw segregation.  Drawing on sources in France and the United States, as well as civic, church, and other primary documents in New Orleans, Dessens examines the salient features of the refugees’ former society, the reasons they left, the migration itself, and their reception and integration into New Orleans society. Revealing a better understanding of migratory movements and of Louisiana’s exceptionalism in the United States, this study will be of special interest to historians of the South, Gulf South, Louisiana, and New Orleans, as well as African American, Latin American, and Caribbean history, migration, and genealogy.

Haitian Revolution: A History From Beginning To En...

Taking The High Places: The Gospel's Triumph Over ...

Guests Of The Sheik: An Ethnography Of An Iraqi Vi...

An Unbroken Agony: Haiti, From Revolution To The K...

Best Nightmare On Earth: A Life In Haiti (A Destin...

₱ 4,163.00
Pre-order Item
I confirm to purchase this pre-order item.
Other Choices
Return Policy
For more details please visit our page about Cancellations, Returns, and Refunds