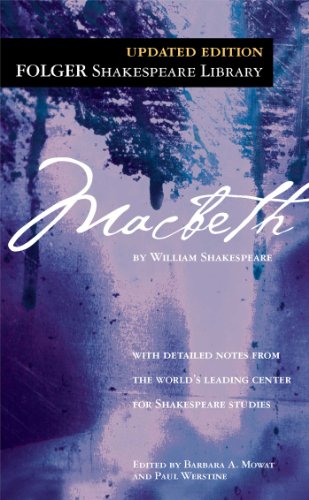 Product Description The authoritative edition of Macbeth from The Folger Shakespeare Library, the trusted and widely used Shakespeare series for students and general readers. In 1603, James VI of Scotland ascended the English throne, becoming James I of England. London was alive with an interest in all things Scottish, and Shakespeare turned to Scottish history for material. He found a spectacle of violence and stories of traitors advised by witches and wizards, echoing James’s belief in a connection between treason and witchcraft. In depicting a man who murders to become king, Macbeth teases us with huge questions. Is Macbeth tempted by fate, or by his or his wife’s ambition? Why does their success turn to ashes? Like other plays, Macbeth speaks to each generation. Its story was once seen as that of a hero who commits an evil act and pays an enormous price. Recently, it has been applied to nations that overreach themselves and to modern alienation. The line is blurred between Macbeth’s evil and his opponents’ good, and there are new attitudes toward both witchcraft and gender. The edition includes: -Freshly edited text based on the best early printed version of the play -Newly revised explanatory notes conveniently placed on pages facing the text of the play -Scene-by-scene plot summaries -A key to the play’s famous lines and phrases -An introduction to reading Shakespeare’s language -An essay by a leading Shakespeare scholar providing a modern perspective on the play -Fresh images from the Folger Shakespeare Library’s vast holdings of rare books -An up-to-date annotated guide to further reading Essay by Susan Snyder The Folger Shakespeare Library in Washington, DC, is home to the world’s largest collection of Shakespeare’s printed works, and a magnet for Shakespeare scholars from around the globe. In addition to exhibitions open to the public throughout the year, the Folger offers a full calendar of performances and programs. For more information, visit Folger.edu. Review ""Macbeth" is a blast...ghoulish...beguiling...sardonic...an expression of how captivating an evening of crackling Shakespeare can be." -- Peter Marks, "The Washington Post" "The explosive and overwhelming effect of a truck bomb...this horrific, riveting "Macbeth" ought to be seen by as many people as possible." -- Terry Teachout, "The Wall Street Journal" About the Author William Shakespeare was born in April 1564 in the town of Stratford-upon-Avon, on England’s Avon River. When he was eighteen, he married Anne Hathaway. The couple had three children—an older daughter Susanna and twins, Judith and Hamnet. Hamnet, Shakespeare’s only son, died in childhood. The bulk of Shakespeare’s working life was spent in the theater world of London, where he established himself professionally by the early 1590s. He enjoyed success not only as a playwright and poet, but also as an actor and shareholder in an acting company. Although some think that sometime between 1610 and 1613 Shakespeare retired from the theater and returned home to Stratford, where he died in 1616, others believe that he may have continued to work in London until close to his death. Barbara A. Mowat is Director of Research  emerita at the Folger Shakespeare Library, Consulting Editor of  Shakespeare Quarterly, and author of  The Dramaturgy of Shakespeare’s Romances and of essays on Shakespeare’s plays and their editing. Paul Werstine is Professor of English at the Graduate School and at King’s University College at Western University. He is a general editor of the New Variorum Shakespeare and author of  Early Modern Playhouse Manuscripts and the Editing of Shakespeare and of many papers and articles on the printing and editing of Shakespeare’s plays.

Before
₱ 556.00
Pre-order Item
I confirm to purchase this pre-order item.
Other Choices
Return Policy
For more details please visit our page about Cancellations, Returns, and Refunds