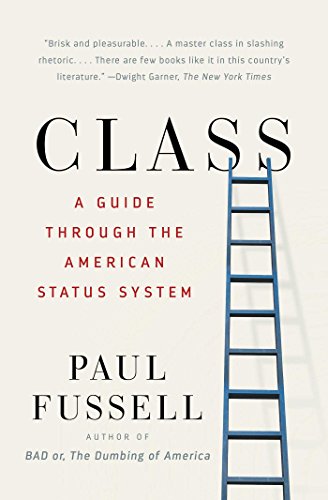 Class: A Guide Through the American Status System

Class: A Guide Through the American Status System Features

About Class: A Guide Through The American Status System

Product Description The bestselling, comprehensive, and carefully researched guide to the ins-and-outs of the American class system with a detailed look at the defining factors of each group, from customs to fashion to housing. Based on careful research and told with grace and wit, Paul Fessell shows how everything people within American society do, say, and own reflects their social status. Detailing the lifestyles of each class, from the way they dress and where they live to their education and hobbies, Class is sure to entertain, enlighten, and occasionally enrage readers as they identify their own place in society and see how the other half lives. Review Chicago Sun-Times Highly amusing....a witty, persnickety, and illuminating book....fussell hits the mark. The Washington Post Move over, William Buckley. Stand back, Gore Vidal. And run for cover, Uncle Sam: Paul Fussell, the nation's newest world-class curmudgeon, is taking aim at The American Experiment. Wilfrid Sheed The Atlantic A fine prickly pear of a book....Anyone who reads it will automatically move up a class. Alison Lurie The New York Times Book Review A shrewd and entertaining commentary on American mores today. Frighteningly acute. About the Author Paul Fussell, critic, essayist, and cultural commentator, has recently won the H. L. Mencken Award of the Free Press Association. Among his books are The Great War and Modem Memory, which in 1976 won both the National Book Critics Circle Award and the National Book Award; Abroad: British Literary Traveling Between the Wars; Wartime: Understanding and Behavior in the Second World War; and, most recently, BAD or, The Dumbing of America. His essays have been collected in The Boy Scout Handbook and Other Observations and Thank God for the Atom Bomb and Other Essays. He lives in Philadelphia, where he teaches English at the University of Pennsylvania. Excerpt. © Reprinted by permission. All rights reserved. Chapter 1 A Touchy Subject Although most Americans sense that they live within an extremely complicated system of social classes and suspect that much of what is thought and done here is prompted by considerations of status, the subject has remained murky. And always touchy. You can outrage people today simply by mentioning social class, very much the way, sipping tea among the aspidistras a century ago, you could silence a party by adverting too openly to sex. When, recently, asked what I am writing, I have answered, "A book about social class in America," people tend first to straighten their ties and sneak a glance at their cuffs to see how far fraying has advanced there. Then, a few minutes later, they silently get up and walk away. It is not just that I am feared as a class spy. It is as if I had said, "I am working on a book urging the beating to death of baby whales using the dead bodies of baby seals." Since I have been writing this book I have experienced many times the awful truth of R. H. Tawney's perception, in his book Equality (1931): "The word 'class' is fraught with unpleasing associations, so that to linger upon it is apt to be interpreted as the symptom of a perverted mind and a jaundiced spirit." Especially in America, where the idea of class is notably embarrassing. In his book Inequality in an Age of Decline (1980), the sociologist Paul Blumberg goes so far as to call it "America's forbidden thought." Indeed, people often blow their tops if the subject is even broached. One woman, asked by a couple of interviewers if she thought there were social classes in this country, answered: "It's the dirtiest thing I've ever heard of!" And a man, asked the same question, got so angry that he blurted out, "Social class should be exterminated!" Actually, you reveal a great deal about your social class by the amount of annoyance or fury you feel when the subject is brought up. A tendency to get very anxious suggests that you are middle-class and nervous about slipping down a rung or two

The Old Money Book: How To Live Better While Spend...

₱ 3,735.00
Pre-order Item
I confirm to purchase this pre-order item.
Other Choices
Return Policy
For more details please visit our page about Cancellations, Returns, and Refunds