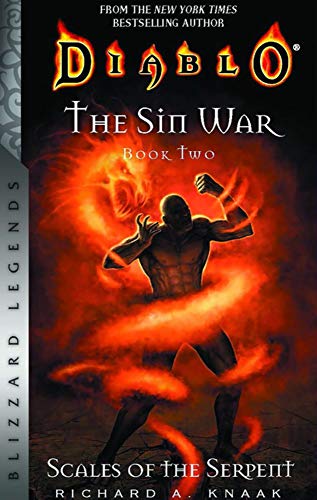 About Diablo: The Sin War, Book Two: Scales Of The

Product Description Since the beginning of time, the angelic forces of the High Heavens and the demonic hordes of the Burning Hells have been locked in the Eternal Conflict for the fate of all Creation. That struggle has now spilled over into Sanctuary -- the world of men. Determined to win mankind over to their respective causes, the forces of good and evil wage a secret war for mortal souls. This is the tale of the Sin War -- the conflict that would forever change the destiny of man.  Bent on destroying the evil cult of the Triune, Uldyssian does not yet suspect that Inarius -- secret Prophet of the Cathedral of Light -- has been subtly aiding his quest. Obsessed with restoring Sanctuary to its former glory, Inarius has been playing Uldyssian against the two great religions in a reckless attempt to topple them both. But another player has slipped back into the equation. The demon Lilith, once Inarius's lover, seeks to use Uldyssian as her own pawn in a scheme to turn humans into an army of nephalem -- godlike beings, more powerful than any angel or demon, who could overturn all Creation and elevate Lilith to a supreme being. An original tale of swords, sorcery, and timeless struggle based on the bestselling, award-winning M-rated computer game from Blizzard Entertainment. Intended for mature readers. About the Author Richard A. Knaak is the New York Times and USA Today bestselling author of The Legend of Huma, WoW: Wolfheart, and nearly fifty other novels and numerous short stories, including works in such series as Warcraft, Diablo, Dragonlance, Age of Conan, the Iron Kingdoms, and his own popular Dragonrealm. He has scripted comics and manga, such as the top-selling Sunwell trilogy, and has also written background material for games. His works have been published worldwide in many languages. His most recent releases include Black City Demon --- the second in his new urban fantasy series from Pyr Books, Reaper's Eye for the Pathfinder series, and a new edition of his novel King of the Grey. He is presently at work on several other projects, among them continuing Knights of the Frost for the Dragonrealm, Black City Dragon --- the sequel to Black City Demon --- and more. The entire Turning War trilogy (Dragonrealm) --- Dragon Masters, The Gryphon Mage, and The Horned Blade --- will be released from Permuted Press in the summer of 2017 starting in July. Currently splitting his time between Chicago and Arkansas, he can be reached through his website: http://www.richardallenknaak.com where more information on this trilogy can be found. While he is unable to respond to every e-mail, he does read them. Join his mailing list for e-announcements of upcoming releases and appearances. Please also join him on Facebook at @richardallenknaak and Twitter.

Before
₱ 1,291.00
Pre-order Item
I confirm to purchase this pre-order item.
Other Choices
Return Policy
For more details please visit our page about Cancellations, Returns, and Refunds