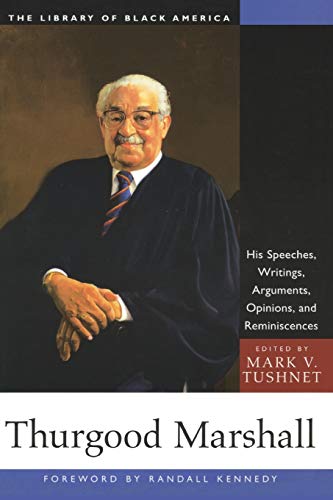 See more product information!
-
Save 18%
Before
₱ 1,857
Price Tracker
*Used item/s available. *Price and Stocks may change without prior notice
Pay with

About Thurgood Marshall: His

Product Description Much has been written about Thurgood Marshall, but this is the first book to collect his own words. Here are briefs he filed as a lawyer, oral arguments for the landmark school desegregation cases, investigative reports on race riots and racism in the Army, speeches and articles outlining the history of civil rights and criticizing the actions of more conservative jurists, Supreme Court opinions now widely cited in Constitutional law, a long and complete oral autobiography, and much more. Marshall’s impact on American race relations was greater than that of anyone else this century, for it was he who ended legal segregation in the United States. His victories as a lawyer for the NAACP broke the color line in housing, transportation, voting, and schools by overturning the long-established “separate-but-equal” doctrine. But Marshall was attentive to all social inequalities: no Supreme Court justice has ever been more consistent in support of freedom of expression, affirmative action, women’s rights, abortion rights, and the right to consensual sex among adults; no justice has ever fought so hard against economic inequality, police brutality, and capital punishment. From Library Journal Tushnet (constitutional law, Georgetown Univ. Law Ctr.), one of Thurgood Marshall's former law clerks on the Supreme Court, is the author of two previous works on the civil-rights and constitutional-law work of the trailblazing Marshall, the first African American member of the U.S. Supreme Court. This volume is sure to become the standard reference for those who wish to know Marshall, one of the critical American civil rights pioneers of the 20th century, in his own words. In a career ranging from his trial and appellate work for the NAACP to his tenure as an associate justice of the Court, Marshall wrought revolutionary changes in U.S. law and politics, and this collection of his legal briefs, writings, speeches, and judicial opinions, plus a never-before-published oral interview, gives us a superior analysis of the advocate, the democrat, the dissenter, and the unflagging fighter for equality. Recommended for all libraries. Stephen K. Shaw, Northwest Nazarene Univ., Nampa, ID Copyright 2001 Reed Business Information, Inc. Review “Thurgood Marshall was more than a crusader for justice, more than a torch-bearer for liberty; he was a teacher who taught us to believe in the shield of justice and the sword of truth.”  —Vernon Jordan “Much has been written about the man, but the new book Thurgood Marshall: His Speeches, Writings, Arguments, Opinions and Reminiscences is the first to collect his own words, offering a comprehensive selection of his most significant writings.”  — Bookshelf “A welcome anthology of Mr. Marshall's professional writings as lawyer, judge and storyteller . . . an invaluable collection”  —The Lawyer's Bookshelf About the Author Mark V. Tushnet is a professor of constitutional law at Georgetown University Law Center and is the author of Making Civil Rights Law: Thurgood Marshall and the Supreme Court, 1936–1961 and Making Constitutional Law: Thurgood Marshall and the Supreme Court, 1961–1991. He lives in Washington, D.C.

Devil In The Grove: Thurgood Marshall, The Grovela...

Before
₱ 896.00
Pre-order Item
I confirm to purchase this pre-order item.
Other Choices
Return Policy
For more details please visit our page about Cancellations, Returns, and Refunds