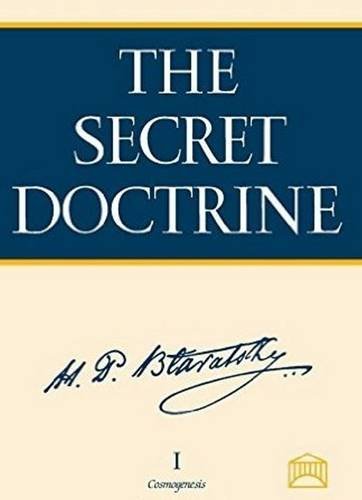 The Secret Doctrine: The Synthesis of Science, Religion, and Philosophy (2-volume set)

About The Secret Doctrine: The Synthesis Of

Product Description Continuously in print for over 100 years, the SD remains today the most comprehensive sourcebook of the esoteric tradition, outlining the fundamental tenets of the Secret Doctrine of the Archaic Ages. Challenging, prophetic, and strikingly modern, it directly addresses the perennial questions: continuity of life after death, purpose of existence, good and evil, consciousness and substance, sexuality, karma, evolution, and human and planetary transformation. Based on the ancient Stanzas of Dzyan with corroborating testimony from hundreds of sources, these volumes unfold the drama of cosmic and human evolution -- from the reawakening of the gods after a Night of the Universe to the ultimate reunion of cosmos with its divine source. Supplementary sections discuss relevant scientific issues as well as the mystery language of myths, symbols, and allegories, helping the reader decipher the often abstruse imagery of the world's sacred literature. This edition is a character-for-character, line-for-line reproduction of the two-volume 1888 first edition. It is set in new type which closely matches the Miller & Richard Old Style font used in the original. The Index at the end of Volume II is the version revised in 1925. Review This massive study is an astonishing document. Blavatsky synthesizes science and spirituality into an exhilarating journey of spiritual awareness. --The Book Reader (1988) You dismiss H. P. Blavatsky rather too easily as 'hocus pocus.' Nobody ever affected the thought of so many able men and women by 'hocus pocus. The real source of her influence is to be found in The Secret Doctrine, a book on the religions of the world suggesting or disclosing an underlying unity between all great religions. It was a book which Maeterlinck said contained the most grandiose cosmogony in the world, and if you read it merely as a romantic compilation, it is one of the most exciting and stimulating books written for the last hundred years. It is paying a poor compliment to men like Yeats, Maeterlinck, and others, to men like Sir William Crookes, the greatest chemist of modern times, who was a member of her society, to Carter Blake, F.R.S., the anthropologist, and the scholars and scientists in many countries who read H. P. Blavatsky's books, to assume that they were attracted by 'hocus pocus.' If you are ever in the National Library, Kildare Street, and have a couple of hours to spare, you might dip into 'The Proem' to The Secret Doctrine, and you will understand the secret of the influence of that extraordinary woman on her contemporaries. --George W. Russell (AE), Irish poet and essayist About the Author Helena Petrovna Blavatsky was born August 12, 1831, at Dnepropetrovsk, Ukraine, daughter of Colonel Peter Alexeyevich von Hahn and novelist Helena Andreyevna (née de Fadeyev). In 1849 she married N. V. Blavatsky, and shortly thereafter began more than 20 years of extensive travel, which brought her into contact with mystic traditions the world over. She was the principal founder of The Theosophical Society in New York City in 1875, and devoted her extraordinary literary talents to its humanitarian and educational purposes until her death in London, England, on May 8, 1891.

Isis Unveiled: Both Volumes - A Master-Key To The ...