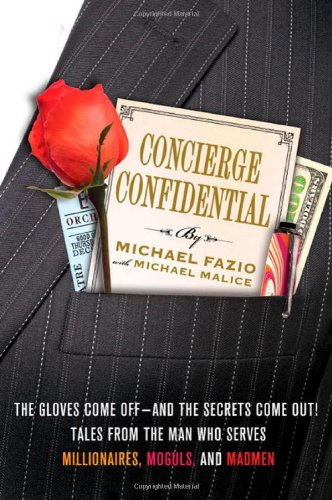 Concierge Confidential: The Gloves Come Off--and the Secrets Come Out! Tales from the Man Who Serves Millionaires, Moguls, and Madmen

Product Description New York City’s top concierge gives up a keyhole view into the luxe hotel rooms, private dining and dressing rooms of the ridiculous, rich and demanding Michael Fazio is the ultimate behind-the-scenes support man. Want two orchestra tickets to the Broadway musical that just won the Tony? Call Fazio. How about an upgrade to first class on an overbooked overnight flight to Tokyo? Call Fazio. Or a roomful of fresh hydrangeas—in winter? That’s right. Call Fazio. From his early start as the harried and neglected personal assistant to a typical L.A. casting agent, Fazio took what he learned there and moved into concierge work at New York City’s Intercontinental Hotel, where he was eventually able to parlay his services into a large and successful business of his own. In Concierge Confidential, Fazio reveals the behind-thescenes madness that goes into getting the rich and famous what they want, and shares some great insider knowledge on how to get access to the unattainable without making the concierge, waiters and other service people crazy. A few of Fazio’s tips include: • When and how much to palm in tips • How to get a seat or ticket to the hottest thing in town • How to avoid being labeled a rube the minute you walk through the door • How you can become your favorite store or restaurant’s most beloved customer • And much more Review "A hilarious peek at the tricky situations a caretaker at a top New York hotel finds himself in."-- Harper's Bazaar   "There's a little bit of con in concierge. It's our job."--Michael Fazio in Entertainment Weekly   "A juicy, compulsively readable ... tell-all book...How many memoirs manage to be both a quintessential show bizy beach read and a text that should be taught in every business school in the country?"-- Connecticut Post About the Author MICHAEL FAZIO is a partner in Abigail Michaels Concierge, Manhattan’s premier concierge business, serving almost 20,000 condominiums, hotels and private clients. He has been featured in a wide variety of publications, including The New York Times, The New York Post and Crain’s New York Business, and is a recurring guest on ABC’s The View. He lives in New York City.   MICHAEL MALICE is the co-author of Made in America: the Most Dominant Champion in UFC History, a New York Times bestseller, and the subject of Harvey Pekar’s Ego & Hubris. He lives in Brooklyn. Excerpt. © Reprinted by permission. All rights reserved. 1.   Almondgeddon You sell the sizzle, and not the steak. There’s no apartment building more sizzling than The Setai Wall Street, which has the chutzpah to describe itself as “the world’s most privileged condominium”—and the reputation to back it up. It’s as dark as a nightclub in the lobby, with Buddha Bar music playing in the background. It smells very exotic, too. You can’t really tell if it’s fresh gardenias, or if they have scented candles, but it definitely smells very nice—and very, very rich. The floor is covered with beautiful silk rugs, and the walls are adorned with gigantic tribal jewelry pieces framed in boxes that protrude almost a foot off the wall. You’d expect there to be some Playboy Playmate in a gorgeous nightgown, smoking a cigarette and dipping into caviar, lounging on the sofa in the lobby. My concierge company had long since taken concierging outside of the hotel context and into luxury buildings, but there’s luxury and then there’s luxury. When it came to our relationships with buildings, we always got the “nice girl,” the Betty. We never got the fancy, sexy Veronica—and The Setai was definitely Veronica. Being a concierge is often about trying to get behind the velvet rope. Getting The Setai would be like jumping over the rope and parking ourselves there, so that we’re not on the other side constantly trying to push our way in. We’d be in a position to decide who gains access. I wanted to send in a proposal when The Setai was first going