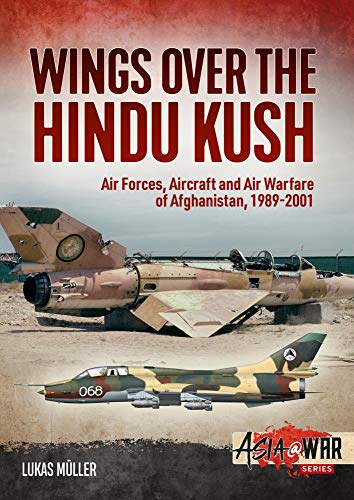 About Wings Over The Hindu Kush: Air Forces, Aircraft And Air Warfare Of Afghanistan, 1989-2001

Product Description This is the story of nine diverse air forces, their aircraft, and air warfare over Afghanistan in the period between the Soviet withdrawal of 1989, and the US-led Western intervention in 2001. Afghanistan is widely considered one of the World’s most primitive and hostile environments. The terrain is rugged and the climate harsh; in many parts of the country the local society developed over millennia in total isolation from the outside world; other areas experienced invasions by Alexander the Great, Genghis Khan, the British Empire, and felt strong influence from Czarist Russia and then the Union of Soviet Socialist Republics. Since 1978, the country has been savaged by an uninterrupted war fought by a host of diverse parties. The military history of an entire series of coups of the late 1970s, and the resulting military intervention of the former Union of Soviet Socialist Republics was widely published on over time. On the contrary, the period from 1989 until 2001 is by far the poorest-recorded. This period encompassed the downfall of the Democratic Republic of Afghanistan in the face of a near-simultaneous dissolution of the USSR, a military coup d’etat and an onslaught by multiple Pakistan-supported armed opposition parties in 1992, the sudden emergence of the Taliban and their rapid take-over of the country in the 1994-1996 period, and their alliance with al-Qaeda that launched the murderous terror attacks against the United States of America of 9/11 – in turn provoking an international military intervention – yet little is known in the wider public about years that actually shaped the country as we know it today. Drawing upon a unique set of little-known recollections, other documentation and a handful of related media reports collected over the last 20 years, Lukas Müller provides not only a detailed reconstruction of the war between the armed forces of diverse local warlords: he provides an intricate story of all the air forces operated by diverse warlords during the 1990s, including the unique ‘Islamic Emirate of Afghanistan Air Force’ (IEAAF). Emerging from the remnants of the former, ‘regular’ Democratic Republic of Afghanistan Air Force (DRAAF), reinforced through defections from diverse of other parties, and supported by Pakistan, the IEAAF became one of most potent branches of the Taliban military. While flying an apparent miscellany of worn out Soviet/Russian-made aircraft, it proved an effective combat force, exercising a continuously growing impact upon developments on the battlefield. As usual in the @War series, ‘Wings over Hindu Kush’ is richly illustrated with a selection of exclusive photography, more than a dozen authentic colour artworks, and a similar number of maps. It provides an exclusive source of reference for enthusiasts and professionals alike. About the Author Lukas Müller is an amateur historian who has spent the last 20 years studying wars that have plagued Afghanistan since the late 1970s. In this book he demystifies the civil war of the 1990s and places often misinterpreted issues into a proper context. After publishing several articles on the ACIG.info website and in the specialized press, this is his first instalment for Helion.

The Banknotes Of The Imperial Bank Of Persia: An A...

The Crusades: The Authoritative History Of The War...

Mediterranean Encounters: Artists Between Europe A...

The Shi'a Of Samarra: The Heritage And Politics Of...

₱ 2,133.00
Pre-order Item
I confirm to purchase this pre-order item.
Other Choices
Return Policy
For more details please visit our page about Cancellations, Returns, and Refunds