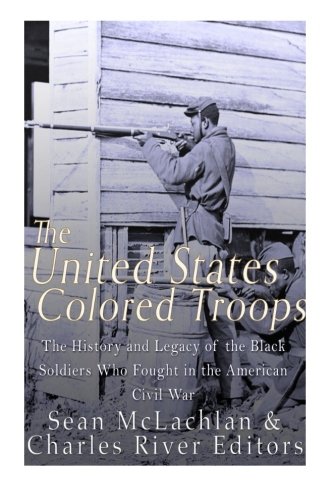 The United States Colored Troops: The History and Legacy of the Black Soldiers Who Fought in the American Civil War

About The United States Colored Troops: The History And

*Includes pictures *Includes accounts of the battles written by black soldiers *Includes online resources and a bibliography for further reading *Includes a table of contents "Who would be free themselves must strike the blow....I urge you to fly to arms and smite to death the power that would bury the Government and your liberty in the same hopeless grave. This is your golden opportunity." – Frederick Douglass After the Battle of Fort Sumter made clear that there would be war between the North and South, support for both the Union and Confederacy rose. Two days after the surrender of the fort, President Abraham Lincoln issued a call-to-arms asking for 75,000 volunteers, a request that would rely on Northern states to organize and train their men. While most Americans had hoped to avert war, many abolitionists had come to view war as inevitable, and the news from Fort Sumter suggested a chance to rectify the country’s original sin through the defeat of the South. Though abolitionists were a minority that was mostly confined to New England and often branded as radicals, they had long sought to end slavery and secure basic civil rights for blacks. One of the most famous abolitionists, the escaped slave Frederick Douglass, realized immediately what kind of opportunity the Civil War presented to all blacks, whether they were slaves or free: "Once let the black man get upon his person the brass letter, U.S., let him get an eagle on his button, and a musket on his shoulder and bullets in his pocket, there is no power on earth that can deny that he has earned the right to citizenship." In 1861, Lincoln was particularly concerned about alienating the border slave states that had not joined the Confederacy, particularly Kentucky and Missouri. The fighting at Fort Sumter had already driven Virginia into the Confederacy, and Lincoln rightly worried that the conscription of black soldiers might alienate whites in the North and the border states. As he famously put it, “I hope to have God on my side, but I must have Kentucky.” When Generals John C. Frémont and David Hunter issued proclamations emancipating slaves in their military regions and permitting them to sign up for active duty, the Lincoln Administration swiftly and sternly revoked their orders. Ultimately, and perhaps not surprisingly, the War Department would only change its tune once it felt that doing so was a military necessity. Most notably, even before Lincoln issued the Emancipation Proclamation, the Union had organized its first black regiment; in July of 1862, General David Hunter, the same one whose emancipation order had caused a political crisis in 1861, impressed slaves in the South Carolina Sea Islands and enlisted them in the Union Army to deprive the Confederates of the ability to rely on them. While it was obviously a sensitive issue to emancipate slaves in border states, Lincoln clearly understood the military value gained by adding Southern slaves to the Union war effort, and it was a logical stepping stone from Hunter’s actions to simply recruiting blacks to aid the North. In time, the addition of black soldiers would help turn the tide of the war, adding hundreds of thousands of soldiers to the ranks, and the U.S. Colored Troops would fight in some of the most famous battles of the war, including at Fort Wagner, Fort Pillow, and at the Battle of the Crater during the siege of Petersburg. While there continues to be controversy over the way Southern slaves were utilized by the Confederacy, it’s unquestionable that freedmen and escaped slaves were crucial to lifting the North to victory from 1863-1865. The United States Colored Troops: The History and Legacy of the Black Soldiers Who Fought in the American Civil War traces the development of black regiments during the war and the impact they had on the second half of it.

The Negro's Civil War: How American Blacks Felt An...

₱ 1,568.00
Pre-order Item
I confirm to purchase this pre-order item.
Other Choices
Return Policy
For more details please visit our page about Cancellations, Returns, and Refunds