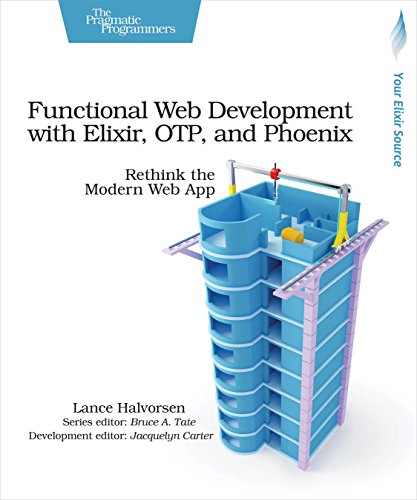 About Functional Web Development With Elixir, OTP, And

Product description Elixir and Phoenix are generating tremendous excitement as an unbeatable platform for building modern web applications. For decades OTP has helped developers create incredibly robust, scalable applications with unparalleled uptime. Make the most of them as you build a stateful web app with Elixir, OTP, and Phoenix. Model domain entities without an ORM or a database. Manage server state and keep your code clean with OTP Behaviours. Layer on a Phoenix web interface without coupling it to the business logic. Open doors to powerful new techniques that will get you thinking about web development in fundamentally new ways. Elixir and OTP provide exceptional tools to build rock-solid back-end applications that scale. In this book, you'll build a web application in a radically different way, with a back end that holds application state. You'll use persistent Phoenix Channel connections instead of HTTP's request-response, and create the full application in distinct, decoupled layers. In Part 1, start by building the business logic as a separate application, without Phoenix. Model the application domain with Elixir functions and simple data structures. By keeping state in memory instead of a database, you can reduce latency and simplify your code. In Part 2, add in the GenServer Behaviour to make managing in-memory state a breeze. Create a supervision tree to boost fault tolerance while separating error handling from business logic. Phoenix is a modern web framework you can layer on top of business logic while keeping the two completely decoupled. In Part 3, you'll do exactly that as you build a web interface with Phoenix. Bring in the application from Part 2 as a dependency to a new Phoenix project. Then use ultra-scalable Phoenix Channels to establish persistent connections between the stateful server and a stateful front-end client. You're going to love this way of building web apps! What You Need: You'll need a computer that can run Elixir version 1.5 or higher and Phoenix 1.3 or higher. Some familiarity with Elixir and Phoenix is recommended. Review "A must-have for new Elixir programmers ready to take on modern web development with the unique features of the platform. Lance gently guides readers through complex topics using fun, digestible examples. From OTP to proper Phoenix architecture, this book takes you step by step from the basics to building your own powerful, real-time applications." -- Chris McCord, Author of the Phoenix Framework "What makes this book important and unique is the fact that it focuses more on development practices and less on technology mechanics. I recommend this book to anyone who wants to build production systems with Elixir and Phoenix." -- Saša Jurić, Software Developer, Aircloak "Every Elixir developer should buy and read Lance's book. There are a lot of questions in the rapidly growing Elixir community about how to structure apps with Phoenix and OTP, and Lance provides compelling and thoughtful answers. The Islands app that the reader builds throughout the book isn't simply an app to learn functional web development; it's the blueprint for correctly building out almost any Elixir app." -- Ben Marx, Lead Engineer, Bleacher Report "For many people, their first experience with Elixir is in the context of Phoenix, and when they build their app it's a "Phoenix app"---which is great! But eventually they hit a wall and want to learn more about OTP and Elixir. This is the book they should reach for, and the book I am sending to as many people as I can." -- Jason Stiebs, Partner, RokkinCat LLC " Functional Web Development with Elixir, OTP, and Phoenix teaches the radical design shift from traditional web development architecture to one that leverages stateful servers, persistent client connections, and a full embrace of the separation of concerns. If you're interested in a modern web architecture that meets the demands of today and tomorrow, I highly recommend this book." -- Moxley Stratton, Elixir Software Engineer, Weedmaps About the Author Lance Halvorsen is a member of the Phoenix core team, the author of the Phoenix Guides, and a senior software architect at Le Tote.

Before
₱ 2,928.00
Pre-order Item
I confirm to purchase this pre-order item.
Other Choices
Return Policy
For more details please visit our page about Cancellations, Returns, and Refunds
×
Announcement

Here is an update on Galleon.ph operations during MECQ

Active hours now is from 8am to 5pm Monday to Saturday

We are not receiving inbound calls however we are doing outgoing calls for followups. SMS are accepted by not monitored actively.

Hope to see you aboard!