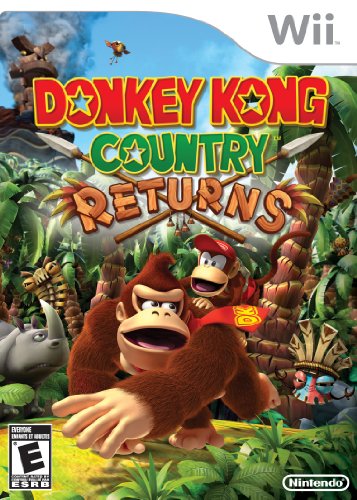 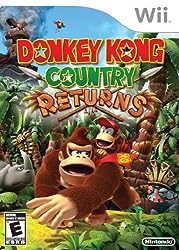 Amazon.com Inspired by earlier games in the Donkey Kong Country series, Donkey Kong Country Returns is a new take on a beloved Nintendo franchise. The first Donkey Kong Country game developed for play for Wii, this new iteration blends familiar actions, levels and characters with a whole new graphical treatment and feel, as well as new control schemes and play options. Features include: a co-op play option allowing you to team up as Donkey Kong and Diddy, radically different visuals ranging from nearly 3D treatment to others that appear in silhouette, two different controller schemes and more. A New Country for Old Friends Under the influence of a group of evil Tikis, the animals of Donkey Kong Island have raided Donkey Kong's banana hoard and stolen his stash of bananas - and being an ape of large appetites he understandably wants them back. Good thing that you are along for the ride. With Donkey Kong Country Returns, Retro Studios brings Donkey Kong back to a banana and platforming hungry public in a new side-scrolling adventure with familiar characters and new levels that reignite the passion players had for the Super NES original and all things Donkey Kong. Join Donkey Kong and sidekick Diddy in a whole new side-scrolling adventure.View larger. Gameplay Like earlier Donkey Kong Country games, Donkey Kong Country Returns is a side-scrolling platformer, but although the game contains classic references, as well as levels and activities reminiscent of earlier games in the series, it is far from a remake. In fact, Donkey Kong Country Returns stands very much on its own not only in its nearly 3D status, but also in its new visual treatment and control scheme. The game features the familiar team of Donkey Kong and his little buddy Diddy Kong. The goal is make your way across Donkey Kong Island collecting bananas and search for hidden items as you swing on vines, ride mine carts and more as you avoid the variety of enemies and situations set against you. New silhouette graphical treatment of both game heroes and enemies in certain levels also introduces new challenges, as players must perform all actions from within an entirely new perspective. The game also features the players choice of either the Wii Remote/Nunchuk controller configuration, or a sideways oriented Wii Remote. In addition to simple navigation and jumping movements, the Wii Remote also allows for a variety of other actions, including: ground pounds, rolls and even air blowing with simple, yet timed shaking of the remote. In addition, the game also contains fun and user-friendly co-op functionality. In co-op mode players take on the role of either Donkey Kong or Diddy. Both characters have abilities of their own, but work together. Beyond this the game takes possibilities for cooperation even further, especially with players of different skill levels, as Diddy can if need be simply rest on Donkey Kong's shoulder and let him do all the work at times. In the event of death, either character can also be revived by the other by hitting a Donkey Kong barrel within the game. The game also continues the series' use of additional animal friends such as Rambi the Rhino, who can serve as a battering ram and can be ridden in certain areas of the game. Key Game FeaturesRetro Studios faithfully restores everything that made the original series great, from barrel cannons to mine carts, and then builds on those elements with stunning graphics and new layers of depth to the world and game play. The game offers the traditional side-scrolling experience everyone loved, but with levels created in fully rendered 3D environments.Diddy Kong joins the quest. With his trusty backpack, he can produce a jet pack or Peanut Pop Guns to give Donkey Kong more abilities.For the first time ever, the franchise features the ability for two people to play together at the same time - one as Donkey Kong, one as Diddy Kong. Players can navigate the levels separately or as one unit. Didd

₱ 4,724
Pre-order Item
I confirm to purchase this pre-order item.
Other Choices
Return Policy
For more details please visit our page about Cancellations, Returns, and Refunds